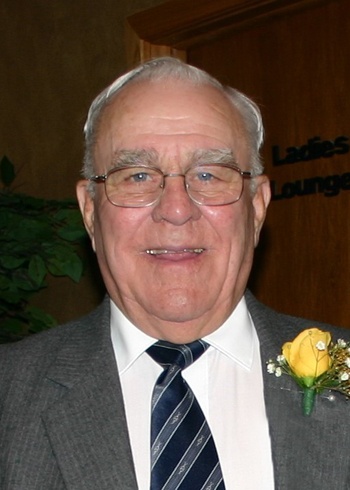 Vaughn was born on September 21, 1928 in Arkansaw, WI, the youngest son of David and Mary (Brunig) Bien. He graduated from Cannon Falls High School and went on to attend St. Thomas University.

He married Therese O’Reilly on September 15, 1949 at St. Columbkill Catholic Church, and they raised seven children together.  He managed the G.O. Miller Telephone Company and later the Sleepy Eye Telephone Company in Goodhue.

Vaughn was very active in Holy Trinity Catholic Church and was known for his commitment and service to his community. He was a 1964 charter member of the Goodhue Lions Club and held many offices including club president. He also served as District Governor, was the only past Council Chairman serving twice in the MD5M, and was on the Lions Eye Bank board for 20 years. He was inducted into the 2007 Lions Hall of Fame. Vaughn also served as the mayor of Goodhue for 28 years. He served on many committees over the years, including trails, swimming pool, and natural gas pipeline.

He loved to travel in the U.S. and overseas, winter in Florida, collect seashells, wood working, playing cards and Cribbage, gambling, and growing rose bushes.

He was preceded in death by his parents; son, Thomas “Tom” Bien; grandson, Joel Bien; and brothers, Wayne and Robert “Bob” Bien.

A visitation will be held at Holy Trinity Catholic Church in Goodhue on Monday, May 24 from 4-7 pm. Mass of Christian Burial will be on Tuesday, May 25 at 11 am, with visitation from 10-11 am, at Holy Trinity. Interment will follow at St. Columbkill/Holy Trinity Catholic Church, Belle Creek. Active urn bearer will be granddaughter, Kellie Bien.  Honorary urn bearers will be remaining grandchildren.

To order memorial trees or send flowers to the family in memory of Vaughn Bien, Sr., please visit our flower store.