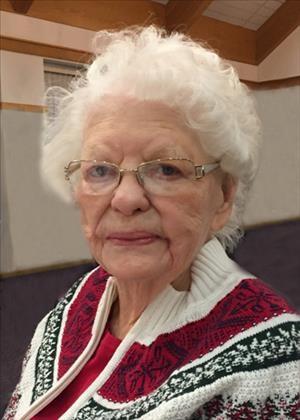 Adeline Jeanette (Perso) Lundsted, age 93 of Northfield, died on Tuesday morning, March 14, 2017 at the Northfield Care Center. She was born on July 19, 1923 in Pigeon Falls, WI, the daughter of Alfred and Aletta (Hagen) Nelson. Attended beauty school, and was a beautician in Augusta, WI and later LaCrosse, WI until 1952. She was a homemaker and later worked in the yarn department at Dayton's for many years, and later at Kathy's Place in Burnsville Center. She married Ralph Perso on May 15, 1943 in Pigeon Falls, WI. He died on September 10, 1976. She married her high school sweetheart, Gordon Lundsted on July 21, 1985 in Richfield. He died in May, 1988. She is a member of Spring Garden Lutheran Church, and a former member of Richfield Lutheran Church, where she was active in the Naomi Circle. She was a Girl Scout leader, and a member of the Richfield Garden Club. She moved to Cannon Falls in 1996, where she lived at Stonehouse Apartments until 2006. She moved to Twin Rivers Senior Campus until September, 2015, when she moved a final time to Northfield Care Center. Adeline was a very welcoming and giving person, and her positive nature was a comfort to many. She would help anyone out! Her home was open to many for short or extended stays if need be. She was an avid knitter and made numerous baby afghans, as well as prayer shawls for the church. In her younger years, she enjoyed bowling and golfing. Christmas was her favorite time, baking many Norwegian goodies. She is survived by her daughter, Christine (Neal) Sjoquist of Cannon Falls; four grandchildren, Lincoln (Kim) Sjoquist of Goodhue, Serene (Daryn) Smith of Parker, CO, Grant (Tiffany) Sjoquist and Clinton (Bonnie) Sjoquist, all of Cannon Falls; twelve great-grandchildren, Luke, Ashlyn, and Chloe Sjoquist, Colten and Sianna Smith, Josie, Jillian, and Sadie Sjoquist, Sophie, Harrison, Caroline, and Coralie Sjoquist; and sister, Evelyn Goplin of Apple Valley. She is preceded in death by her parents, Alfred and Aletta Nelson; her husbands, Ralph Perso and Gordon Lundsted; and brother, Hensel Nelson. Funeral service will be held on Friday, March 17 at 11:00 a.m., with visitation from 10-11 a.m., at Spring Garden Lutheran Church, Cannon Falls. Following a luncheon, interment will be at Oak Hill Cemetery, 5901 Lyndale Ave. S., Richfield, MN.

To order memorial trees or send flowers to the family in memory of Adeline Lundsted, please visit our flower store.