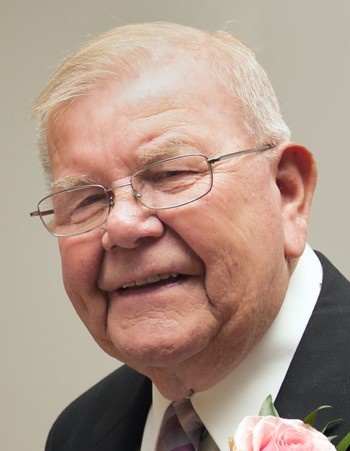 After serving as a mechanic in the US Army during the Korean conflict, Pete settled into life in Cannon Falls with his new wife Bonnie.  He was always interested in all things mechanical, but his true love was interacting with people.  A Maytag repairman for the Helen Siem Hardware store, a car salesman for Lee Chevrolet, and a maintenance foreman were all part of Pete’s career until Memorial Day, 1969.  On that day, he opened “Remme’s Skelly” on the corner of Hwy. 52 & 19.  He had finally found his calling.  His warm personality, his desire to help others, and his love of automobiles made this a perfect fit for Pete.  Decades later spent the last working days at Gemini, Inc. in Cannon Falls, where his skills, especially his love of people, were once again in use.  Pete loved Cannon Falls, the Bakery, the Farmers Market, and everyone he came in contact with.

Pete and Bonnie were married for 60 years, until Bonnie succumbed to cancer on October 27, 2014.  He is survived by his son Bob (Denise Zantow) of Elm Grove, WI; daughter Becky (Julie Anderson) of Minneapolis; grandchildren Stephanie (Dave) Peterson and Nick (Sarah) Remme; 9 great-grandchildren; sister Virginia Wille; sisters-in-law Ellie Leiding of Mankato, Gracie Leiding of Ceylon, Judy (Richard) Benz of Concord, NC; and many nieces and nephews.  He was preceded in death by his parents, Albert and Leona Remme; and his sister, Dorothy Knoblauch.

Visitation will be held on Friday, Dec. 29 from 3-7 p.m. at Lundberg Funeral Home in Cannon Falls. A memorial service will be on Saturday, Dec. 30 at 1:00 p.m., with visitation from 12-1 p.m., at St. Paul’s Ev. Lutheran Church, Cannon Falls. A military honors farewell will follow the service. Friends and family are invited to a fellowship time with cake and coffee at the church after the military honors. Memorials are preferred to the Cannon Falls Veterans Honor Guard.

To order memorial trees or send flowers to the family in memory of Albert Remme, please visit our flower store.