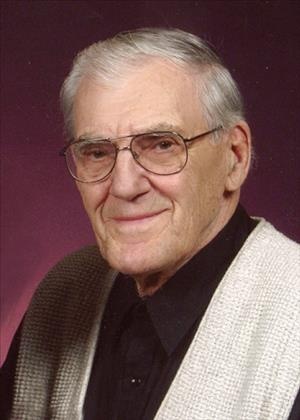 Alfred L Scheer, longtime resident of Cannon Falls, died Tuesday, April 25, 2017. He grew up in Big Fork, Minnesota. After high school he enlisted in the army in 1942 and served in battle in the 5th Tank Corps Army Division under General Patton during World War II, and fought in the Battle of the Bulge. He served in many places in Europe and North Africa including Anzio, Cassino, and Southern France. Al and five of his brothers served at the same time, and all returned home. He married Marian Jean Scheff in 1947.

Al worked for himself for many years and owned and operated a cement block plant and gravel pit. He and Marian were founding members of St. Paul's Evangelical Lutheran Church. He loved watching baseball, playing cards, fishing, and spending time at his family's old homestead.

Surviving Al is his wife Marian of 70 years; two daughters, Rochelle Gilde of River Falls, Wisconsin, and Denise Scheer of Duluth, Minnesota, and a son Colin Scheer of Cannon Falls; three grandchildren; and two great-grandchildren. He is also survived by one sister, Bid Admire of Prescott, Arizona.

Al was preceded in death by his parents Ed Scheer and Maude Taylor, as well as 8 brothers and sisters. A memorial service will be held at St. Paul's Evangelical Lutheran Church in Cannon Falls on Friday, April 28th at 2:00 pm, with visitation from 1-2 p.m. Pastor John Baumann will officiate. Al will be interred with military honors at a later date at Ft. Snelling National Cemetery. Donations to honor Al's memory should be made to St. Paul's Evangelical Lutheran Church, Cannon Falls, MN.

with visitation from 1-2 p.m. at church

To order memorial trees or send flowers to the family in memory of Alfred Scheer, please visit our flower store.