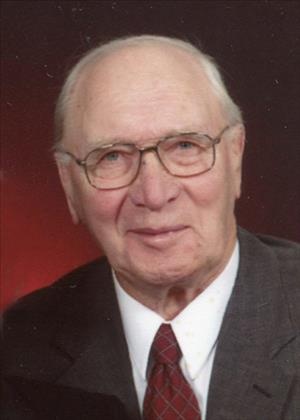 Devoted Husband, Father, Grandfather, and Great-Grandfather Andrew John Wellman passed away at the age of 90 years on Friday, September 12, 2014 at Trinity Care Center in Farmington, MN. He was surrounded by his loving family when he left his earthly bounds to join his late wife, Florine, in their heavenly home. He was born August 31, 1924 to Frank and Gertrude (Hoelscher) Wellman near Humphrey, Nebraska. Andy had seven brothers and sisters and spent his childhood on the farm. He and Florine Kraus were married on April 25, 1950 in Rosholt, SD and farmed in Nebraska, South Dakota and western Minnesota before settling in Hampton, MN in 1960 where he was a cement finisher and farmer until he retired in 1990. Andy never really retired, working at St. Mathias Church in Hampton until February of 2013 at the age of 88. Andy was very handy, and made a hobby of fixing things. He always loved hunting, fishing, gardening and telling stories. He was blessed with a very strong Catholic faith his whole life, and a special devotion to the Blessed Virgin, which he shared with his children and grandchildren. Andrew is survived by children Mary Wellman, Kathryn (Richard) Seitz, Paula (Edward) Gergen, Andrea (John) Jewison, John (Cynthia) Wellman, Maynard (Karen) Wellman, Joanne Wellman, Julianna Donwen, Gary (Olga) Wellman, 28 grandchildren, 13 great-grandchildren; and brother, Francis Wellman. Andy was preceded in death by his wife Florine, his parents Frank and Gertrude Wellman, an infant grandson and an infant great-grandson, brothers, Raymond, Alfred , and Leander; sisters Marcella Heiman, Gertrude Endres , and Clara Schiller; two infant sisters and one infant brother. The family gives special thanks to the staff of Trinity Care Center in Farmington, MN. We are grateful for the warm and loving care they gave to Dad over the past 1-1/2 years. Visitation will be held on Sunday, September 14, from 4-8 pm at Lundberg Funeral Home in Cannon Falls. Mass of Christian Burial will be held on Monday, September 15 11:00 am at St. Mathias Catholic Church in Hampton, MN. There will also be visitation at church one hour prior to Mass. Interment will follow at St. Mathias Cemetery. Active pallbearers will be his grandsons.

To order memorial trees or send flowers to the family in memory of Andrew Wellman, please visit our flower store.