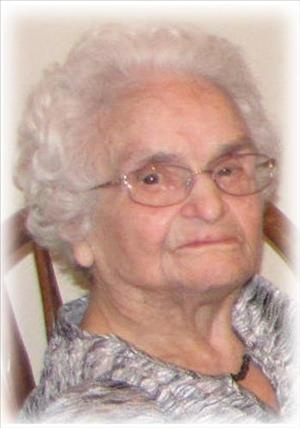 Anna Belle Johnson, age 102 of Cannon Falls, died peacefully at home on Friday morning, January 20, 2012. Anna was born on October 24, 1909 in Clear Lake, MN, the daughter of Oscar and Lizzie (Shaw) Soule. She grew up and attended school in Clear Lake, MN and moved to Cannon Falls in 1932. She married Howard Tyrrell in December, 1926 in Blue Earth County, and he died in 1932. She met Theodore G. "Ted" Johnson in Cannon Falls and they later married on October 13, 1934 at the Vasa parsonage. She worked at home and raised their five children. In the 1940's, she worked locally in Cannon Falls; as a waitress at the Dairy Bar, as a cook at the Cannon Falls High School Cafeteria and the Mineral Springs Sanatorium. She was a member of First English Lutheran Church, and was also a former member of the Order of the Eastern Star, Zion Chapter #6 in Cannon Falls. Anna loved her family and enjoyed spending time with them! She is survived by her four children, Betty Woodward of Dundas, Ralph Tyrrell of Barstow, CA, MaryAnn (Don) Banks of Cannon Falls, and Bonnie (Harvey) Erlanson of Cannon Falls; 19 grandchildren, 45 great-grandchildren and 38 great-great-grandchildren; and many other loving relatives. She was preceded in death by both husbands; daughter, Fran Lorenson Janu; granddaughter, Susan Banks; grandson, Alan Barsness; and great-grandson, Andrew Banks. Funeral service will be held on Friday, January 27 at 11:00 a.m., with visitation from 10-11 a.m., at First English Lutheran Church in Cannon Falls, with Pastor Phillip Ruud officiating. Interment will follow at the Cannon Falls Cemetery. Active pallbearers will be grandsons, Ted, Bruce and John Erlanson, Lyle Lorenson, David and Stuart Banks. Honorary pallbearers will be her remaining grandchildren. In lieu of flowers, memorials are preferred to donor's choice or First English Lutheran Church.

There will be visitation at the church from 10-11 a.m.

To order memorial trees or send flowers to the family in memory of Anna Johnson, please visit our flower store.