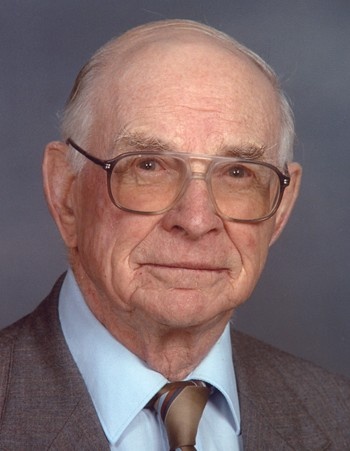 Art was born at home on the family farm in Stanton Township, MN on June 11, 1918, the son of John A. and Cora E. (Felien) McKinley. He graduated from Cannon Falls High School in June, 1935.  He served with the US Army during WWII. He spent 39 months in the Pacific Theatre, including Midway, Saipan, Hebrides, Makin, and Gilbert Islands.

He married Mary Dorothea Ahern on August 27, 1946. He worked for many years at Searle Grain Company, Cannon Falls. Art was a member of the Cannon Falls Bears 1952 State Championship Team.  He was a life member of the VFW Nelson Scofield Post #4452.

He is survived by his daughter, Sharon (James) Munson of Faribault; grandchildren, Carrie Munson of Kingwood, TX and Adam Munson of Manhattan, NY; great grandchildren, C.J. Adorna and Felix Adorna; sister, Marion Kodelka of Prior Lake; sister-in-law, Rosemary Jones of Burnsville; and nieces and nephews.

Mass of Christian Burial will be on Saturday, March 3 at 10:30 a.m., with visitation from 9:30-10:30 a.m., at St. Pius V Catholic Church in Cannon Falls.  Interment with military honors will follow at the church cemetery. Active pallbearers will be Adam Munson, C.J. Adorna, Felix Adorna, Michael Jones, Jeff Welf, and Richard Kodelka. Honorary pallbearer will be Larry Benson.

To order memorial trees or send flowers to the family in memory of Arthur McKinley, please visit our flower store.