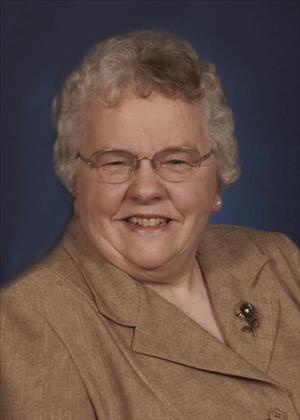 Audrey Dorothea Anderson was born on May 17, 1937 in Red Wing, the daughter of George and Celia (Mann) Johnson. She grew up on a farm near Red Wing and was baptized and confirmed at St. Paul Lutheran Church. She went to Burnside School through the eighth grade and graduated from Red Wing Central High School in 1955. Following high school Audrey attended the Minneapolis Business College. On June 30 of 1956, she was united in marriage to Roger L. Anderson at St. Paul Lutheran Church in Red Wing. They lived in Burnside after their marriage until buying their farm in Vasa Township. Audrey was a member of the Spring Garden Lutheran Church. She was a loving and devoted wife, mother, grandmother, and great-grandmother. She was passionate about her farm, being outside, raising calves and chickens. She enjoyed gardening and bird feeding. Audrey was famous for awesome rice pudding. Survivors include her husband Roger, her children Becky (Kilb) Norgaard of Minnetonka, Scott (Laurie) Anderson of Cannon Falls, Penny (Gary) Spillman of Stanton, and Debby (Lori Lundell) Anderson of Minnetonka; grandchildren Chad Hillman of Chanhassen, Kelly (Lucas) Kramer of Newton, KS, Douglas (Rachel Peterson) Spillman of Northfield, Anne (Matthew) Shoemaker of Randolph, and Michael (Cady Meschke) Spillman of Inver Grove Heights; great-grandchildren Dylan and Carly Hillman, Ryan and Ethan Kramer, and Henry and Lorelai Shoemaker; and many nieces and nephews. Audrey was preceded in death by her parents George and Celia, her brother LaVerne Johnson, sister-in-law Darlene Johnson, and twin brothers in infancy. Blessed be her memory.

To order memorial trees or send flowers to the family in memory of Audrey Anderson, please visit our flower store.