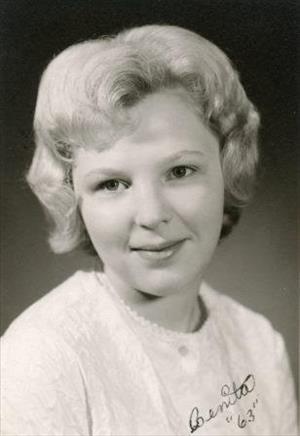 Benita "Bonnie" L. (Thompson) Grunenwald, age 70 of Cannon Falls, MN and Mesa, AZ, and is now in the arms of her beloved Savior on Tuesday, December 15, 2015 from an acute cardiopulmonary arrest. A memorial service will be held at 2:00 pm Saturday, December 26, 2015 at St. Ansgar's Lutheran Church, 7459 Hwy 19 Blvd, Cannon Falls with a visitation gathering for one hour prior to the service at church. In lieu of flowers memorials may be directed to the Pancreatic Research Program. Benita graduated from Aitkin High School and went on to become a beautician. She worked for many years at Tiffany's in Cannon Falls as a hairdresser before she made the decision to be a stay at home mom while Dan traveled for his job. She later opened up Interior Designs with her sister-in-law Kathy in Cannon Falls. Upon closing that business, she started a job at PPI where she was the purchasing manager for over 20 years. She was also her daughters' Girl Scout leader for many years. She enjoyed sewing and making many of her daughter's clothes as they were growing up. Two of her more memorable sewing projects was when she made her daughter Kriston's senior prom dress that Kriston had designed, as well as making and designing her granddaughter's flower girls dress for Heather's wedding to Nate. She later got involved with selling Tastefully Simple products that she enjoyed doing, as she loved baking. She was on the board of directors for the Minnesota Street Rod Association, where she held her position for 11 years. She enjoyed old cars and the car shows, along with all the many friends she made while doing this. After she and Dan decided to sell their home in Cannon Falls, they made the decision to live in their RV full-time and spent their summers in Minnesota and the winter months in Mesa, AZ. While in Mesa, Bonnie joined a group called the crafty ladies and a quilting club where they made quilts for a number of organizations. Bonnie also created an alterations business that she ran out of her little shop by their RV in Mesa. They recently were hired at the Dakota county Lake Byllesby Campground as Campground Host and Hostess, which Bonnie enjoyed very much and looked forward to doing it for years to follow. Benita is survived by her husband Daniel and their daughters, Kriston (Chad) Shorter of Cannon Falls and Heather Robinson (and friend Adam Krause) of Bloomington. Their seven grandchildren, Ashleah, Kailey, Josie, Carli, Elliott, Gavin and Kourtney; four great-grandchildren, Brandon, Brooklyn, Alexander and Tres; three brothers, Kenny (Nancy) Thompson, Harry (Kathy) Thompson, Greg Thompson and sister-in-law Jeanie (Thomas) Thompson and several nieces and nephews. She is preceded in death by her parents, Harry and Gladys Thompson; brother Thomas Thompson and son-in-law, Nate Robinson.

To order memorial trees or send flowers to the family in memory of Benita Grunenwald, please visit our flower store.