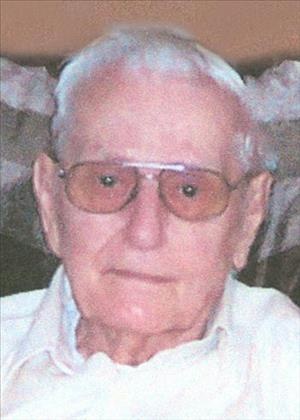 Bernard John Venn, 88, passed away December 10, 2013. Bernard "Bernie" Venn was born in Blue Earth, Minnesota on March 11, 1925 to Meta (Jahnke) and Iver Venn. He grew up in Blue Earth, attending school there and graduating from Blue Earth High School in 1943. He joined the U.S. Navy Seabees in 1943 and served as a carpenter's mate in the Philippines during World War II. Upon discharge, in 1947, he attended Dunwoody Institute in Minneapolis to learn auto body repair. During this time, he met Charlotte Anne Cope and the couple married on June 10, 1950. They lived in Faribault where he served as body shop manager at Lockwood Motors for twenty-two years. In 1981, Bernie and Char purchased land in northern Minnesota, near Cook. Together they built a log cabin made from trees found on their property. In 2000, Bernie and Char moved to Cannon Falls where they resided with their son and daughter-in-law. After Char's death in 2009, Bernie moved to Twin Rivers Senior Campus in Cannon Falls until the fall of 2013 when he moved to Angels Care Center, also in Cannon Falls. Bernard Venn is survived by his children, Cheryl (Harvey) Winter of Crosby, Catherine (Tim) McCartney of Mankato, Mike Venn (Kathy) of Lyle, and Barry Venn (Mary Harkins) of Cannon Falls. He is also survived by ten grandchildren, nine great-grandchildren, and one sister, Marlene Delperdang of Faribault. His wife, his parents, one brother, and three sisters precede him in death. A private family gathering is planned. Memorials may be sent to St. Croix Hospice in Rochester.

To order memorial trees or send flowers to the family in memory of Bernard Venn, please visit our flower store.