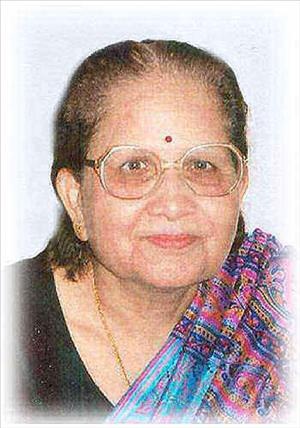 Kiran Kulshrestha Bhagwan Devi "Kiran" Kulshrestha, age 73 of Northfield, formerly of New Orleans and India, died unexpectedly on Tuesday afternoon, June 5, 2012 at Abbott Northwestern Hospital in Minneapolis. Kiran was born on July 10, 1938 in Bachepura, U.P. India, the daughter of Bahori Lal and Atar Kulshrestha. She married Prem K. Kythe on February 14, 1955 in Bachepura, India. They came to the United States in the 1960's, and she received her high school equivalency in 1972 from McDonogh High School in New Orleans. She was a wonderful homemaker, raising two sons, and was a great motivator to her family. She loved her family, especially her grandchildren. She is survived by her husband of 57 years, Prem K. Kythe of Northfield; two sons, Dave K. (Bharti) Kythe of Moorpark, CA and Father Jay K. Kythe of Cannon Falls; two grandchildren, Keshav and Ida; brothers, Komal, Nirmal, Vimal, Naval and Vinay, and sister, Vidyut, all of India. She was preceded in death by her father, Bahori Lal; mothers, Atar and Kailash; and brother, Prabal. A visitation will be held on Sunday, June 10 from 4-7 p.m. at Lundberg Funeral Home in Cannon Falls.

To order memorial trees or send flowers to the family in memory of Bhagwan Kulshrestha, please visit our flower store.