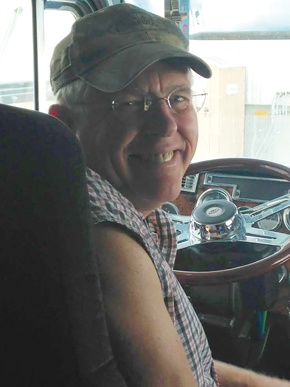 Bob loved his family, especially his wife Randi and their three girls, Venessa, Megan, and Kaitlin. He was their rock and continuous source of guidance. His outlook on life was always positive and he wore a smile even under the crappiest situations. He always said he was the luckiest man in the world.

Bob would teach life lessons not by telling you but by showing you, set by his example. He was always kind and had the best attitude. Even when faced with difficult times he would always think of others first.

After graduating Cannon Falls High School, Bob attended Rochester Vo-Tech and rebuilt his bright blue 1971 Chevelle in an auto mechanic program. Bob worked on the family farm until 1991, when he left to go haul tanker for Hernke’s Transfer. He hauled milk for Hernke’s until 1999 when he purchased his first blue Peterbilt and started working for himself as Bob Samuelson Trucking. In 2004 he bought his final Blue Pete which he used to haul mostly grain, until his last load on December 16, 2017. He put on over 3 Million miles in his career until a cancer diagnosis caused him to sell his business.

Bob loved the Big Iron Classic truck show. It was the one weekend a year he would park and shine up his Blue Peterbilt and spend the weekend with his family and friends, yelling “Rookie” and “Full Pull” from the stands during the truck pull.

Bob is proceeded in death by his parents Myron and Arlene Samuelson and his father-in-law, Elroy Hernke.

To order memorial trees or send flowers to the family in memory of Bob Samuelson, please visit our flower store.