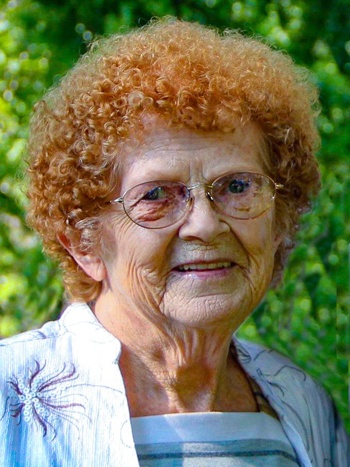 Graduating from Kenyon High School in 1955, she went on to receive her nursing education at the Methodist-Kahler School of Nursing in Rochester, Minnesota. She was in the first group of nurses employed at the newly opened Cannon Falls Community Hospital. She was employed in Cannon Falls for many years, both at the hospital and at Dr. Molenaar’s clinic. In the 1980’s she began her nursing work in chemical dependency treatment at the Mineral Springs Sanatorium Adolescent Treatment Facility in Cannon Falls. As a friend of Bill W, she continued working in the field of chemical dependency nursing at St. Joseph’s Hospital in St. Paul and St. Mary’s Hospital in Minneapolis. She was proud to be an RN and inspired several people to enter the nursing field.

She was married to high school sweetheart Ordean “Ole” Hallanger in October 1958.

Red was adventurous. She loved to waterski, sailboard and kayak. Before the family acquired an actual ski boat, Ole would pull her on waterskis for hours behind the hand tiller driven boat.  She loved horses and had several through the years for trail riding. In her 40s she became an avid motorcycle rider, riding her own bike through the mountains of Colorado. She also took up downhill skiing in her 40s.

Most friends and relatives will remember Red for her smart aleck sense of humor.  (And her love of McDonald’s mocha frappes.)

In retirement, Red and Ole enjoyed spending time at their lake home and wintering in Kerrville, Texas. When her vascular dementia became more acute, they returned to Cannon Falls to be near family. A few months before Ole’s death in 2016, she moved to the memory care unit at Cannon Rivers.

Visitation will be Saturday, September 7, from 1-3 p.m., with a short program at 2:30 p.m., at Lundberg Funeral Home, Cannon Falls.

To order memorial trees or send flowers to the family in memory of Burdelle "Red" Hallanger, please visit our flower store.