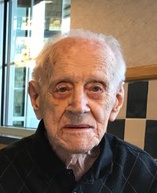 Chuck was born on Feb. 18, 1918 in Dayton, OH, the son of John and Ella (Weaver) Downing. As a teenager he met the love of his life, Janet Brown, and later married her on March 5, 1942; married 75 years, together nearly 83 years! He was drafted into the Ohio National Guard and served on active duty in the South Pacific during WWII with Ohio’s 37th Infantry Division,“The Buckeyes”, earning the Bronze Star. Following the war he returned to Dayton where he worked as a journeyman tool and die maker, making the dies for the first pop-top cans. He dedicated his life to his family and was known for his sense of humor and his whistling. He and Janet retired in FL before moving to MN.

Chuck was preceded in death by his parents; two brothers, John and Robert; and his beloved son Charles E. (Charlie) Downing, Jr.

Private funeral services will be held in Cannon Falls with military honors. Interment will be at the Woodland Cemetery in Dayton, OH.


To order memorial trees or send flowers to the family in memory of Charles Downing, Sr., please visit our flower store.