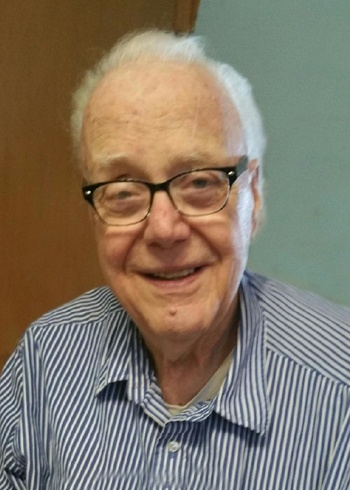 Chuck was born on March 12, 1937 in Cannon Falls, the son of Adolph and Gladys (Berg) Drometer. He graduated from Cannon Falls High School in 1955 and served with the US Army Reserve.

Chuck married Eva Martinson on June 27, 1959 at Spring Garden Lutheran Church, Cannon Falls, where he remained a member for 60+ years. They are both lifelong Cannon Falls residents and made its history their passion. Chuck initially started out working in home construction, Cannon Custom Builders, and then worked as a well-known car salesman for Dabelow Pontiac, later becoming Tom Kadlec Pontiac. They also worked and travelled together as sales reps for Midwest Imports. When the building that was formally known as Windy Acres was purchased by Steve and Sylvia Bauer, Steve and Chuck spearheaded the idea that it would become an antique mall.  Chuck and Eva were hired as the managers and the rest is history! The Countryside Antique Mall was born and the Drometer’s made the shop one the best in the Midwest successfully operating 30 years later.

Both Chuck and Eva were Charter Members of the Red Wing Collectors Society having been among the first 100 who joined the first year it was started in 1977.  In those early years Chuck loved scouring garage sales for oddities made by Red Wing pottery and loved telling success stories about his finds. He, along with a fellow Red Wing collector Dale Erickson, started up the Cannon Valley Collectors Club; a chapter of the Red Wing collector's society and he and Eva were regular attendees and exhibitors at the Red Wing Collectors Society summer conventions.
They also loved collecting Cannon Falls memorabilia as a way of documenting Cannon Falls History. They shared their collection by giving presentations locally.  You can find some of these presentations on the local Cannon Falls Community Television.  They were commonly called upon by many as resources for value and research of items history. If they didn’t have the answer they knew where you could find that answer!

Chuck and Eva are known for their presence in Cannon Falls and the surrounding areas at many community events and have served on several local committees, Cannon Falls Historical Society, Cannon Falls Hospital Board, Spring Garden Church, to name a few.  Awards and plaques for years of service are not uncommon in the Drometer household.

To say they represented the community honestly, proudly and lovingly is an understatement. Although they didn’t have a big family they certainly had many friends that they considered family.  Please think of them fondly when you come across a piece of history and carry that tradition on with your community.

A Celebration of Life service will be held for Chuck on Thursday, October 28 at 11:00am, with visitation from 10-11am, at Spring Garden Lutheran Church. Masks are highly recommended. Interment will follow at the church cemetery.

To order memorial trees or send flowers to the family in memory of Charles "Chuck" Drometer, please visit our flower store.