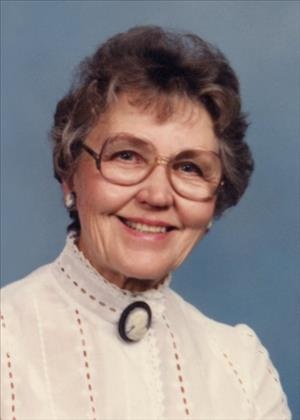 Charlotte Viola "Tootie" (Grisim) DeYoung, age 94, of Cannon Falls, MN died peacefully April 13, 2017 at Three Links Care Center, Northfield, MN. Charlotte was born June 30, 1922 in Hampton, MN, the daughter of Arnold G. and Florence C. (Klein) Grisim and lived as a young girl on the family farm in Randolph, MN. She was a 1940 graduate of Randolph High School. Charlotte was married to Clarence "Donkey" Johnson, and in 1970 married Willis "Bill" DeYoung. She moved to Auburn, MA after marrying Bill and returned to Cannon Falls after his death. As a young single woman Charlotte moved with a friend to Seattle, WA in the 1940s to contribute to the WWII effort. She became a "Rosie the Riveter" there for several years. Upon returning to Cannon Falls after the war she studied fashion design and became the fashion designer for local internationally-known Kid Duds company for many years where she designed children's and adolescent sleepwear, traveled to New York City for buying trips and business meetings. Charlotte enjoyed attending Broadway shows while there. Her love of sewing continued after she moved to MA. She became an expert quilt maker and made dozens of beautiful quilts that she gave away to friends and family. Charlotte loved gardening, cooking with the food from her garden, and entertaining her friends and family. She and Bill wintered in New Smyrna Beach, FL as they grew older and invited many friends from Cannon Falls to join them there. Charlotte and Bill travelled all over the world in retirement. She was preceded in death by her parents; both husbands; and sisters, Arlene "Bea" Mills and Doris "Nook" Davisson. She is survived by her brothers, Arnold "Buzz" Grisim and his wife Margaret of Northfield, MN; Jon Grisim of Cannon Falls, MN; nieces and nephews and their children, Lynda (Ron) Smith of Cannon Falls, Cheryl (Gary) Spidahl of Steilacoom, WA, RJ "Jose" (Donna) Davisson of Sterling, MA and Cannon Falls, Randy (Jo) Mills of Minneapolis, and Jason (Jennifer) Grisim of Mason City, IA. When Charlotte lived in MA, she was especially close to her grand nieces, Blake and Channing Davisson. She is also survived by step-children and step-grandchildren. A memorial gathering will be held on Tuesday, May 2 from 10 a.m. – 12 p.m. at Lundberg Funeral Home, Cannon Falls. Charlotte will be buried at All Faiths Cemetery, Worcester, MA with her husband Bill. Donations may be made to Three Links Care Center.

To order memorial trees or send flowers to the family in memory of Charlotte DeYoung, please visit our flower store.