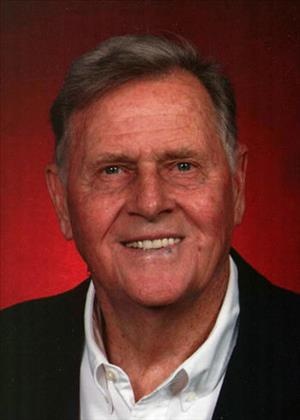 Corley Mortenson, age 83 of Cannon Falls, died on Sunday morning, November 24, 2013 at the Kenyon Sunset Home in Kenyon. His parents, Nels and Emma (Persson) Mortenson immigrated from Skåne, Sweden. Corley was born the second to youngest of eleven children on November 20, 1930 in Shafer, MN. He was baptized and confirmed at a Lutheran church in Taylors Falls, MN. Corley served with the U.S. Army during the Korean Conflict, and was honorably discharge in 1954. He married Verone Colleen Anderson on September 7, 1957 at Clear Lake, IA. They made their home in Randolph for 29 years, where Corley was a volunteer fireman for 9 years. He was a member of St. Mark's Lutheran Church in Randolph. They have been residing in rural Cannon Falls for 24 years. Corley was employed in the construction business until his retirement in 1984 at 54 years of age. He was a member of Local Union #132. Corley loved the Nascar races, and for many years he enjoyed Elko Speedway. He loved taking care of his cars, and he was a great mechanic. He also loved traveling the U.S. and abroad, and was fortunate to see where both of his parents were born and raised in Sweden. Other endeavors were Norway, Alaska, and China, where he walked a couple of miles on the Great Wall. He was preceded in death by his parents, Nels and Emma; 8 brothers and sisters, Eddie, Helen Hooverman, Raymond, Carl, Percy, Ruby Anderson, Betty Landeen, and Wally. He is survived by his wife of 56 years, Verone; children, Candy (Lee) Volkert of Northfield and Scott (Kim) of Randolph; grandchildren, Chelsey Volkert of Burnsville and Brighton Volkert of New Market; Godchild, Todd Haro of Randolph; his best friend and brother, John (Alice) of Chisago City; his sister, Marilyn (Roger) Landreville of Prior Lake; sisters-in-law, Rose Mortenson of Dresser, WI and Anita Mortenson of Summerfield, FL; his loving little pug, Susie Marian; and many nieces and nephews. Visitation will be held on Tuesday, Nov 26 from 5-8 p.m. at Lundberg Funeral Home in Cannon Falls. The funeral service will be on Wednesday, Nov 27 at 11:00 a.m., with visitation at church from 10-11 a.m., at St. Mark's Lutheran Church in Randolph. Interment with military honors will follow at the Cannon Falls Cemetery. Active pallbearers will be nephews, Lester, Bruce, Doug, Brian, Clifford and Roland Mortenson. Honorary pallbearers will be Bill Fruehling, Ken Knafla, Otto Witzman, and Glenn Mortenson. Memorials are preferred to St. Mark's Lutheran Church or donor's choice.

To order memorial trees or send flowers to the family in memory of Corley Mortenson, please visit our flower store.