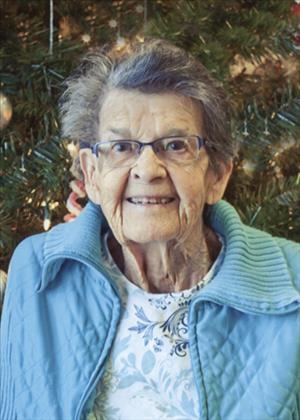 JoAnne Buck Dorothy JoAnne Buck, age 86 of Cannon Falls, died Monday afternoon, April 25, 2016 at her home at Twin Rivers Senior Campus. JoAnne was born on October 6, 1929 in Fargo, North Dakota, the daughter of Harry and Violet (Roser) Washburn. She grew up in the Fargo area and attended Fargo Central High School, graduating in 1947. On May 6, 1948, she married her high school sweetheart, Richard K. "Dick" Buck in Fargo. They lived in Fargo until the early 1960's and later moving to Cannon Falls, where they took over the Renquist Family Farm. They raised their four children and enjoyed being a part of their activities. She enjoyed knitting and was an excellent seamstress. She then worked at Midwest Importers from 1968-1984, and was one of the original office staff. She was a formerly active member of First Congregational United Church of Christ in Cannon Falls. She loved playing in Bridge clubs, and playing golf. They were members of Cannon Country Club and Sun Lakes Country Club, Phoenix, AZ. From 1985 until 2010, they enjoyed their home in Phoenix. JoAnne is survived by her son, Jim (Jenny) of Del Mar, CA; daughters, Jody Freeberg of Cannon Falls and Jill Buck of Phoenix, AZ; six grandchildren, Cary (Laura) Freeberg, Peter Freeberg, Elizabeth (Joel) McGeough, Aaron (Bethany) Kreisler, Dylan Smith and Sara Smith; 9 great-grandchildren; and brother, Jerry (Becky) Washburn of Tucson, AZ. She was preceded in death by her parents; sister, Audrey Washburn; husband, Dick on December 16, 2012; and daughter, Jane Buck. A memorial gathering will be held on Saturday, April 30 from 3-5 p.m., with a prayer service at 4 p.m., at Lundberg Funeral Home, Cannon Falls.

With a prayer service at 4 p.m.

To order memorial trees or send flowers to the family in memory of D. Buck, please visit our flower store.