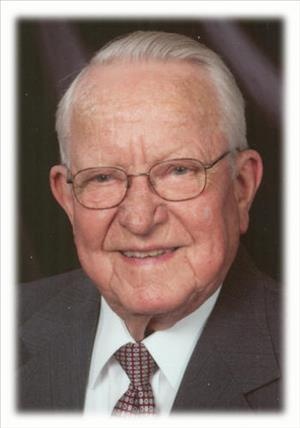 Dale Irving Lorenson, age 85, a lifelong resident of Cannon Falls, died unexpectedly on Tuesday morning, October 23, 2012 at St. Mary's Hospital in Rochester. Dale was born at home in Cannon Falls on April 14, 1927, the son of Lewis and Olga (Johnson) Lorenson. He attended Cannon Falls High School, and went on to serve in WW II with the U.S. Navy Seabees in Guam from May 1945 until his honorable discharge in August 1946. He married Violet Hemmah on August 20, 1949 at First English Lutheran Church. He had been employed with John Deere in Cannon Falls for over 40 years, and had also worked at Koch Refinery for 5 years. He was a life-long active member at St. Ansgar's Lutheran Church, where he was baptized and confirmed, and had sung in the church choir for many years. He was a life member of the VFW Nelson Scofield Post #4452, where he had served as commander. He had also been a charter member of the Cannon Falls Male Chorus, and enjoyed singing with them for many years. Dale will be remembered for his love for his family, and especially enjoyed his grandchildren and great-grandchildren. He also loved spending time with friends, and they had many years of vacations and camping together. He enjoyed fishing, and in later years, reading. He will be greatly missed. He is survived by his wife of 63 years, Vi; daughters, Pam (Steve) Reinke of Cannon Falls and Sandy (Dave) Grzywinski of Bloomington; grandchildren, Jennifer (Jim) Novek of Goodhue and Jeremy (Sara) Reinke of Geneva; 5 great-grandchildren, Shelby and Jonathan Quade, Jamie, Drew and Karly Reinke; sisters-in-law, Joan Hemmah of Cannon Falls and Jeanette Hemmah of Red Wing; and many nieces and nephews. He was preceded in death by his parents; children, Janet Marie and Richard Dale Lorenson; three sisters, twins Janice Lorenson and Jeanette Sande-Larson, and Lorna Flaten; and brother, Lowell "Bud" Lorenson. Funeral service will be held on Thursday, October 25 at 11:00 a.m., with visitation from 9:30-11:00 a.m., at St. Ansgar's Lutheran Church in Cannon Falls. The Cannon Falls Veterans Honor Guard will provide a military farewell following the service outside at church. Active pallbearers will be Tom Grote, Duane Sande, Roger Flaten, Lyle Lorenson, Bruce Johnson and Bruce Hemmah. Honorary pallbearers will be all of the dedicated drivers that have helped bring Dale to dialysis for the past 4 ½ years, Mike Hemmah, Bruce Hemmah, Glenn Schulz, Dave Bremer, Chuck Rademacher, Pete Remme, Lawrence Johnson, Duane Sande, Virgil Qualle, Roger Flaten, Dave Vangsness, Greg Dirckx, Steve Reinke, Marvin Nelson, Ernie Sparstad, Don Sundheim, Bill Schmugge and Earl Johnson. Memorials are preferred to St. Ansgar's Lutheran Church. Interment will take place later at the Cannon Falls Cemetery.

A military honor guard farewell will follow outside of church, after the funeral service.

To order memorial trees or send flowers to the family in memory of Dale Lorenson, please visit our flower store.