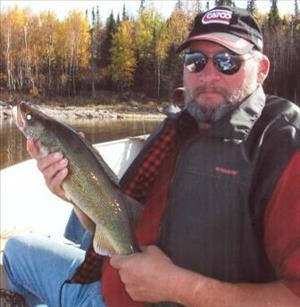 David W. Groenke, age 54 of Dennison, Minnesota and formerly of Cannon Falls, died Wednesday, following a courageous battle with cancer on February 6, 2013 at the Homestead Hospice House in Owatonna, Minnesota. Funeral services will be 1:00 pm, Tuesday, February 12, 2013 at Spring Garden Lutheran Church, 10239 County 1 Blvd, Cannon Falls. Visitation will be held on Monday February, 11, 2013 from 4:00 to 8:00 pm at Lundberg Funeral Home, 5839 Hwy 19 Blvd, Cannon Falls and also one hour prior to the service at the church. Interment will be in the church cemetery. David William Groenke was born June 3, 1958 in Minneapolis, MN to Joel and Marlene (Anderson) Groenke. After graduating from Cannon Falls High School in 1977 he attended further schooling at the University of MN in Waseca. David was married to Teresa Swanson in March of 1980 in Cannon Falls. In 1982 he was started working at Gemini Incorporated as a production supervisor and was employed there until 1992 when he took a job at The Bergquist Company. David loved farming and began milking cows as a young man and later raised hogs. He enjoyed being in the open field and was appreciative when he became a custom applicator for River Country Coopertive and could use some of the high tech gadgets and specialized machinery. He was a big NASCAR fan who enjoyed his motorcycle and going fishing. He never left home without his Chapstick. Many knew him as a good mechanic who was always ready to fix anything or help anyone. David liked to travel when he could and enjoyed socializing… he had an unforgettable laugh. Although farming and being outdoors were things he enjoyed, he loved his family and wore the title of grandpa with pride. David is survived by his four children, Joshua (Heather) Groenke of Northfield, Jacob (Stephanie) Groenke of Hastings, Jonah (Natalie) Groenke of Dennison, Chelsea Groenke (fiancé Joseph) of Dennison; two grandsons, Anthony and Eli; mother of the children, Teresa Groenke; father, Joel (Joyce) of Zumbro Falls; brother Steven Groenke of Eden Prairie; sister, JoEllen (Matthew) Voxland of Kenyon; also aunts, uncles, nieces and nephews. He is preceded in death by his mother, Marlene Groenke.

To order memorial trees or send flowers to the family in memory of David Groenke, please visit our flower store.