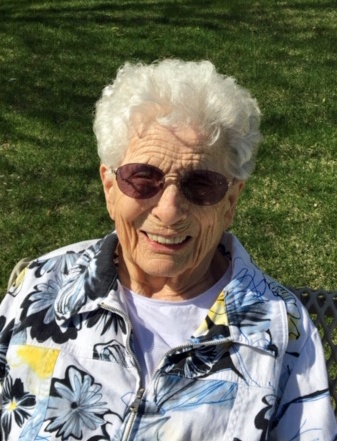 Delores M. (Laurie) O’Gorman was born in rural Goodhue, Minnesota, to Arthur R. and Edith M. (Guenther) Haas, on August 19, 1924.  She graduated from Goodhue High School and the St. John’s Hospital School of Nursing.  Laurie married Robert (Bob) O’Gorman in 1946 and continued her nursing career while having seven children.  She worked at Cannon Falls Community Hospital and Bob’s Red Owl.

After her retirement, Laurie continued her nursing career as a volunteer hospice nurse.  She was a Eucharist Minister at St. Pius V Catholic Church, played bridge, and golfed.  She loved listening to music especially if Bob was singing.  Bob and Laurie wintered in Arizona and traveled the world.

Laurie was an accomplished needlewoman who constructed garments by sewing, crocheting and knitting.  When she learned that Masai girls in Tanzania were not permitted to attend (boarding) School without their own quilts, Laurie completed and sent more than 125 quilts to Africa so the girls could get an education.

The past six- and one-half years, Laurie has been under the care of the wonderful staff at Twin Rivers Senior Campus in Cannon Falls.

Memorials are preferred to the Cannon Valley Senior Center

To order memorial trees or send flowers to the family in memory of Delores O'Gorman, please visit our flower store.