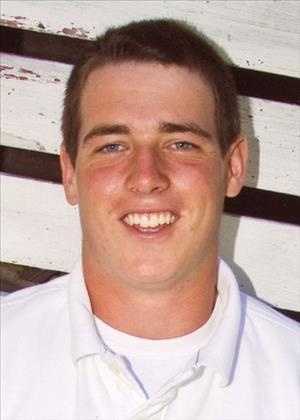 Derek John McNamara, age 21 of Goodhue, died as a result of an ATV accident on Friday, April 25, 2014. Derek was born on February 25, 1993 in Red Wing, the son of Richard and Bonnie (Lindstrom) McNamara. He was baptized and confirmed at St. Columbkill Catholic Church. Derek attended Goodhue school where he was active in sports, FFA, and 4-H. He graduated from Goodhue High School Class of 2011, and then attended the University of WI-Madison where he studied farm management. Derek was passionate about farming and farmed his whole life in the area. At the young age of 17 years, he started his own custom baling business, McNamara Baling. He loved the outdoors, hunting, fishing and water sports. He was active in the Goodhue Jaycees. He is survived by his parents, Rich (Brenda White, Marissa) of Goodhue, Bonnie McNamara (Todd Erickson, Maggie) of Goodhue; sisters, Courtney (Greg) Hovel of Cannon Falls and Sydney McNamara of Goodhue; nephew, Cashton Hovel; grandparents, Ralph McNamara of Zumbrota, and Duane and Carolyn Lindstrom of Vasa; uncles and aunts, Steve and Dawn Lindstrom of Red Wing, Barb and Delmar Hinck of Lake City, Jerry and Linda McNamara of Pine Island, Don and Carmen McNamara of Rochester, Dorothy and Bob Riedel of Zumbrota, Joanne and Steve Carter of Woodbury, Karen and Joe Richardson of Byron and Dave and Rose McNamara of Goodhue; and many cousins and friends. He was preceded in death by his grandmothers, Jeanelle McNamara and Gayle Lindstrom. A visitation will be held on Tuesday, April 29 from 4-8 p.m. at Goodhue High School gymnasium. Mass of Christian Burial will be on Wednesday at 10:30 a.m., with visitation from 9:30-10:30 a.m., at St. Columbkill Catholic Church, Belle Creek. Interment will follow at the Vasa Lutheran Cemetery, with lunch to follow at the Vasa Lutheran Center. Active pallbearers will be Alan Dicke, Zach Hinsch, Reed Lexvold, Jared Dicke, Justin Dicke, Micah Dicke, Daniel McNamara, Michael McNamara and Drew Manthe. Honorary pallbearers will be his basketball teammates, and 2011 classmates.

To order memorial trees or send flowers to the family in memory of Derek McNamara, please visit our flower store.