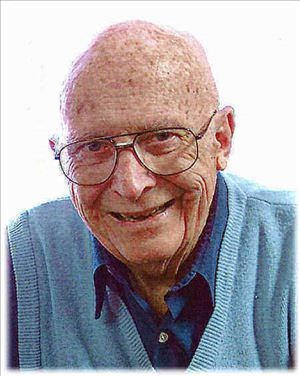 Donald V. O'Reilly, age 91 of Red Wing, formerly of Goodhue, passed away at St. Brigid's at Hi Park in Red Wing on April 5, 2013. Mass of Christian Burial will be 11:00 am MONDAY, April 8, 2013 at Holy Trinity Catholic Church, 211 – 4th Street N, Goodhue, MN. There will be an evening visitation on SUNDAY at the church from 3:00-7:00 pm and also for one hour prior to the service at church. Burial will be in the St. Columbkill Catholic Cemetery, Belle Creek Township. Don was born March 13, 1922 in Goodhue Township, Goodhue County, Minnesota to Vincent and Agnes (Guenther) O'Reilly. He grew up in Goodhue where he graduated from high school in 1941. Don entered active duty in the US Army in 1944 and was stationed in Europe for most of his service. He returned to Goodhue where he started with the US Postal Service as a rural mail carrier. Don touched many lives over the 40 years he delivered the mail and many knew him as the guy with "the lemon drops." He was united in marriage to Jennevie O. Froistad on May 21, 1955 at St. Columbkill Catholic Church in Belle Creek. Don and Jen loved to travel making many trips to Norway and Ireland to visit family. He was very proud of his Irish Heritage. Together they started the Don and Jen O'Reilly Scholarship Fund at St. Luke's Lutheran Church, Holy Trinity Catholic Church, Goodhue High School and Newman Grove High School in Nebraska. For many years they sponsored the Sullivan family from Belfast, Ireland to come to Goodhue. He also enjoyed his daily visits to the Legion hall with the hope of winning the drawings. He is survived by his sister, Therese (Vaughn) Bien of Goodhue; brothers, Gerald "Lefty" of Red Wing and Larry O'Reilly of Anaheim, CA; nieces and nephews, Kathy (Gary) Reynolds, Cherie (Richard) Coffman, Kerry (Pat) Bien, Vaughn Jr. (Bernadette) Bien, Tim (Denise) Bien and John (Andrea) Bien, Tom (Claudia) Froistad, Christy (John) Hartmann, Anita (Rick) Fenno, He was preceded in death by his wife, Jennevie in 2012; parents, Vincent and Agnes; brother James; and nephew Tomas Kent-Bien.

To order memorial trees or send flowers to the family in memory of Donald O'Reilly, please visit our flower store.