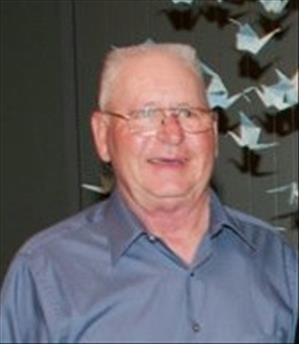 Don Sholing, age 75 of Cannon Falls, died on Friday, August 28, 2015, from the devastating effects of Alzheimer's Disease. Donald Howard Sholing was born on May 26, 1940 in Belle Creek, MN and grew up on the family farm. He married Christine Vold on October 10, 1959 at Aspelund Emmanuel Lutheran Church, and raised six children together in rural Cannon Falls. He owned Kenyon Auto Body for several years, eventually branching out to sandblasting, septic pumping, and lawn care. Whatever the job, Don worked hard every day of his life. He was a longtime member of the "Table of Knowledge" at the Cannonball. In his younger days, Don and his brothers competed in snowmobile racing. For many years, he also enjoyed truck pulls and bowling, which resulted in a shelf full of trophies. He was an occasional deer hunter and an avid fisherman; spending time on Lake Osakis with his brothers, brother-in-law, and nephew Brad was his little piece of heaven on earth. He had a love of animals, from his favorite horse in childhood to his beloved house cats in recent years. His kindness to all people will not be forgotten. Don was a devoted husband and father. He taught his children to work hard, have compassion toward others, keep your chin up when life throws you lemons, maintain a sense of humor, and not take life too seriously. He was preceded in death by his daughter, Kelly; brother, Leonard; sister, Doris Forsell Froyum; nephew, Bruce Forsell; and parents, Engnar and Lorraine Sholing, and Howard and Evelyn Stafford. He is survived by his wife, Christine; children, Debra (Steven) Gesme, Tammy (John) Jendrysik, David (Gina) Sholing, Vicki Sholing, and Julie (Corey) Staples; grandchildren, Michael (Laura) Gesme, Rebecca Gesme, Erica Sholing, Daniel Sholing, Vivienne Jendrysik, and Linden Staples; siblings, Bonnie (Ken) Jenson, Mary (Scott) Weyand, and Bernie (Laurel) Sholing; brother-in-law, Glenn Froyum; and numerous in-laws, cousins, nieces, and nephews. Visitation will be held on Thursday, September 3 from 5:00 - 8:00 PM at Lundberg Funeral Home, Cannon Falls. Memorial service will be Friday at 11:00 AM, with visitation from 10 - 11 AM, at First English Lutheran Church. Inurnment will follow at Cannon Falls Cemetery. Active urn bearers will be Brad Forsell and Ken Jenson. Honorary urn bearers will be grandchildren, Justin Bauer, and Table of Knowledge members.

To order memorial trees or send flowers to the family in memory of Donald Sholing, please visit our flower store.