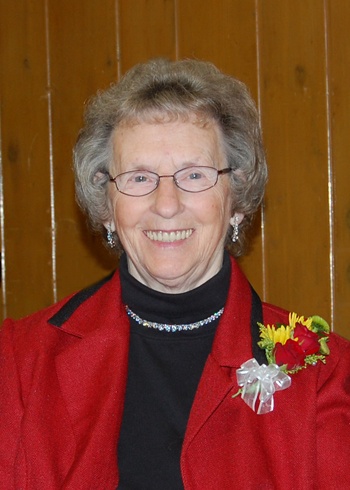 Dorothy was born on January 29, 1931 in Kramer, North Dakota, the daughter of Helmer and Mathilda (Schepp) Schultz. At a young age, her family moved to Cannon Falls, MN. She schooled in Randolph and later graduated from Cannon Falls High School in 1948.

She married William “Bill” Otto on August 7, 1951 at St. Mary’s Catholic Church, New Trier. They raised 11 children in New Trier and were members at St. Mary’s, where she was a teacher’s aide at the school. She was known for her delicious baked bread that she would sell to area families for $.25/loaf. Bill died on October 29, 1975, and she went to work at Dakota County Technical College and Dan’s Bar.

She married Allen Sladek on June 21, 1980 at St. Mary’s, and they moved to Bloomington. She managed the cafeteria at 2 Apple Tree Square for many years. She also worked at numerous schools in the Bloomington area in their cafeterias. She was also active with the Czech/Slovakian Club in St. Paul for 30 years. They moved to Dundas in 2005 and were members of the Church of St. Dominic in Northfield, where she helped with funeral luncheons.

Dorothy enjoyed crocheting, baking, dancing and reading. She had a green thumb when it came to flowers or gardening. She loved her North Dakota trips to see family, and especially loved to be a book buddy at the Cannon Falls Schools for her great-grandchildren.

A Mass of Christian Burial will be held on Monday, January 20 at 11:00 a.m., with visitation from 9-11 a.m., at St. Mary's Catholic Church in New Trier. Interment will follow at the church cemetery.

Memorials are preferred to St. Mary's Church or to donor's choice.

To order memorial trees or send flowers to the family in memory of Dorothy Sladek, please visit our flower store.