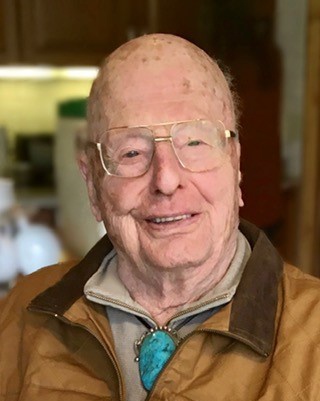 Dr. Robert E. Molenaar, 99, passed away on May 19 th .  Physician, craftsman, storyteller, poet: ninety-nine years on Earth allowed him ample opportunity to witness substantial changes in society and to offer up his opinion on all he observed.

Robert was born April 26, 1921 to parents Peter and Josie Molenaar in rural Kandiyohi County, Minnesota.  His strong ethics were formed while working the family farm.

In the fall of his senior year of high school, a tornado ripped through their Renville area farm, destroying the cornfields. Needed at home to help salvage the crops, Robert missed so much school he did not return. With the intention of continuing in farming, the following fall he enrolled in Ag school. His education was interrupted yet again when he fell ill from a serious mastoid infection that left him near death, causing permanent deafness in one ear.  After recovering, he lived in a boxcar without plumbing or electricity until age 24, educating himself with second-hand textbooks in preparation for enrolling in med school. It was a pinnacle moment for this farm boy with no high school diploma, to finally see his name on the acceptance list into the University of Minnesota’s pre-med program.

It was there at the university that he met Mary Gale, a nursing student.  Three months after meeting, Mary and Robert were married.

In 1952, the new doctor and family moved to Cannon Falls, where he established his clinic and was instrumental in founding the local nursing home and hospital.  There he practiced a large spectrum of general medicine: obstetrics, orthopedic surgery, internal and emergency medicine. In 1996, after 44 years, he retired from medical practice.

Concurrent with the later years of his practice, he found time to build a “barn” that later morphed into a house, using limestone blocks salvaged from the old Falls House Hotel, old area barns and the former Malting house office. It was in this home built with his own hands where he lived out his remaining life.

His interests turned to knife making, an interest sparked many years prior by his blacksmith grandfather. He learned to forge his own steel and made upwards of 500 knives. When the bones in his hammer-wielding hand wore out, he turned his focus to writing- poetry, a self-published book, and many letters to the editor of the Cannon Falls Beacon.

He found pleasure in sharing his wealth of stories and ideas on cosmology, giving tours of his collection of artifacts, feeding the birds and feral cats, and the companionship of his little dog Jasper.

If Robert could have designed his own heaven, he is fishing now with long-time friend Ed Pagel.

Robert was preceded in death by his wife Mary, grandson Dillan, brother Lester, and most recently his brother Allen. He is survived by his children Peter, Nick (Marti Gudmundson), Kurt (significant other Beverly), Karl (Cindy), and Heidi Fernandez: 14 grandchildren, 9 great grandchildren, numerous other relatives, and special friends Leon and Paulette Hanson.

A memorial gathering will be held on Saturday, August 29, from 1:00 - 4:00 pm at Hannah's Bend Park on 9th St N. in Cannon Falls. There is ample parking available at the Cannon Valley Fairgrounds, acroos the street. Please wear a mask, and plan to social distance. In lieu of flowers donations can be sent to the Cannon Falls Historical Society or the Cannon Falls Food Shelf. Lundberg Funeral Home of Cannon Falls is assisting the family.

To order memorial trees or send flowers to the family in memory of Dr. Robert Molenaar, please visit our flower store.