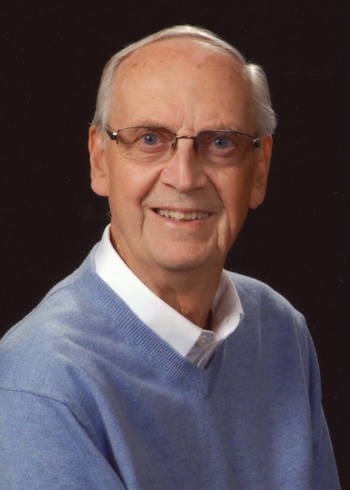 Ernie Olin Thomas Sparstad was born on May 2, 1935 in Dennison to Helmer and Hazel (Urevig) Sparstad. He was baptized and confirmed at Vang Lutheran Church.

Ernie grew up on the family farm in Sogn Valley, graduating from Kenyon High School in 1953. His 45-year career at Lee Chevrolet began in 1957 and the majority of his time there was as Office and Parts Manager. After retirement he worked part-time at Econo Foods for nine years.

He was united in marriage to Betty Lou Taube on September 27, 1958 at St. Ansgar’s Lutheran Church.

Ernie was a charter member of the Jaycees and the Lions Club. He was very active in the community serving the Lions Club as president, part-time treasure and the secretary for 30 years. The Lions’ motto is “WE SERVE” and he did. He was inducted into the Lions Hall of Fame in April of 2015. As a member of the St. Ansgar’s Church, he served on the church council, finance committee, church school superintendent, ushered, and assisted at funerals.

He was always a busy man, meticulous in his work, working on his home, and helping others with projects to be done. He was an all-around handyman and took in repair and refinishing projects. Ernie lived his faith, and he was a man of love and patience. It describes him well in 1Corinthians 13:4-7.

His passion for Chevrolets, especially the Impalas, was developed during his career at Lee’s, owning many including his favorite green 1969 Impala. He loved to cruise his car, attend car shows, and was sometimes lucky enough to bring home a trophy or plaque.

Survivors are his wife of 60 years, Betty; sons and daughters-in-law, Steven and Dianne of Hudson, WI and Timothy and Tonia of Oak Grove; grandchildren, Brian, Sarah, Matthew, Paul, Grant and Kallie; sister and brother-in-law, Laura and Dick Johnson of Red Wing; brother-in-law and sister-in-law, Jerry and LuRene Taube of Cannon Falls; sister-in-law, Shirley Braun of St. Cloud; and nieces, nephews, cousins, and many friends. Ernie was preceded in death by his parents and his brother-in-law Bill Braun.

A memorial service will be held on Monday, August 19 at 12:00 p.m., with visitation from 10-12 p.m., at St. Ansgar's Lutheran Church, Cannon Falls. Interment will follow at the Cannon Falls Cemetery.

To order memorial trees or send flowers to the family in memory of Ernie Sparstad, please visit our flower store.