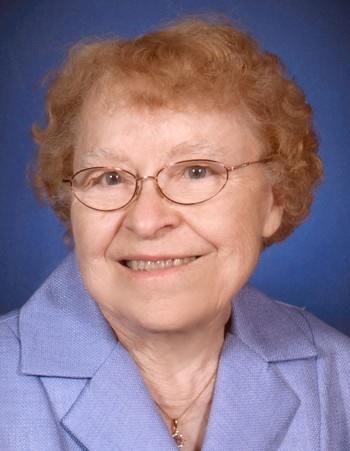 Evelyn Marie Berg, age 93 of Red Wing and currently of Cannon Falls, passed away at Mayo Clinic Health System – Cannon Falls on Saturday morning, January 27, 2018 after a long struggle with Alzheimer’s. She came to reside at The Gardens at Cannon Falls about 3 years and 7 months ago.

Evelyn was born to Claus and Carrie (Johnson) Callstrom on December 17, 1924 in White Rock (Belle Creek Township), MN, where she attended the local country schools. She met Jerauld Berg at a rural school picnic, and they married on December 22, 1943.  They lived on the Callstrom family farm in White Rock until moving to Red Wing in April, 1946.

She and Jerauld owned and operated a small, family grocery store in Burnside in the early 1950’s.  She also worked as a sales clerk at Woolworth’s, then JC Penney in Red Wing.  She retired from JC Penney after 31 years.

She loved spending time with her family and attending church. She was a member of First Lutheran Church in Red Wing.  She enjoyed baking, gardening, music, playing cards and played a mean game of dominoes. She always made sure to end her day with an ice cream cone before bedtime. Visitors to her home could always expect fresh flowers on her table, something yummy to eat, and an invitation to play cards or dominoes.

She is survived by her four children, Janelle (Larry) Fox of Goodhue, Marlowe (Rene) Berg of Rice, Bradley (Vickie) Berg of Red Wing, and Lynne (Jim) Plasek of Shoreview; 10 grandchildren, 18 (soon to be 19) great-grandchildren and 4 great-great grandchildren; sister-in-law, Ilene Callstrom of Kansas City, KS; and many nieces and nephews.

Visitation will be Thursday, Feb 1 from 4-7 PM at the Lundberg Funeral Home in Cannon Falls.  Services will be held on Friday, Feb 2 at 11:00 AM, with visitation from 10-11 AM, at Minneola Lutheran Church in rural Goodhue. Fellowship and a meal at the church will be followed by burial at Oakwood Cemetery in Red Wing at 2:00 PM. Pallbearers will be Corey, Dean, and Timothy Fox, Micah Hoyt, Joshua Mueller, and Joseph Plasek.

In lieu of flowers, memorials are preferred to the Alzheimers Association, American Heart Association or to the donor’s choice.

To order memorial trees or send flowers to the family in memory of Evelyn Berg, please visit our flower store.