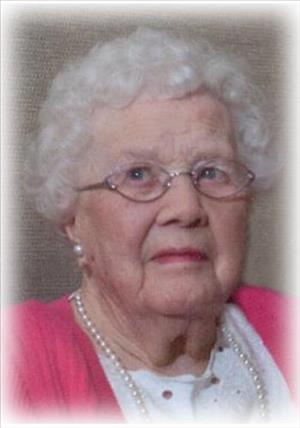 Florence Elvera Erickson, age 103 of Cannon Falls, died peacefully on Sunday morning, September 30, 2012 at Angels Care Center in Cannon Falls, where she has resided since February 2007. Florence was born the youngest of nine at home on the family farm in Leon Township to John A. and Mathilda (Paulson) Anderson. She was baptized, confirmed and married at Spring Garden Lutheran Church, where she continued her lifelong membership. She attended school at District 42 and graduated from the 8th grade. At age 16, she went to work as a maid for the S.B. Foot family in Red Wing, and later worked in Minneapolis at Wells Lamont Glove Company. In 1933 when her mother died, she moved back home to care for her father. She married Paul A. Erickson on October 19, 1935 and they farmed for the first 2 years in Minneola area and purchased the home farm in Leon Township in 1937. They farmed until 1966 and built a new home in the Edgewood area. They enjoyed traveling and 10 years of retirement until her husband died on October 10, 1976. In 1981, she moved to a condo in Cannon Falls and continued residing there until 2007. Her church was very important to her. She taught Swedish School, sang in the choir for many years, sang in small groups, taught Sunday School, was active in the Willing Workers, sewing circle, Bible study, and sang with the Spring Garden Swedish Singers. She also sang with the Red Wing Swedish Singers for many years. She enjoyed knitting, sewing and especially crocheting. She continued to enjoy traveling with her friends. Her family was very important to her and especially enjoyed her grandchildren and great-grandchildren. She will be remembered most for her enjoyment in having a good time and her wonderful sense of humor. She made a wonderful home and has been a terrific role model for her family. She is survived by her children, Charles (Sandy) Erickson, Allen (Kay) Erickson and Pauline (Herb) Nerison, all of Cannon Falls; 8 grandchildren, Todd Erickson (Bonnie McNamara), Brian (Shannon) Erickson, Dawn (Mick) Murphy, Jill (Tom) McCartney, Jeffrey (Monica) Erickson, Jennifer (Aaron) Vaudt, Eric (Michelle) Nerison and Megan Nerison; 8 great-grandchildren, Maggie, Brendan, Kendra, Abbey, Michael, Lucas, Sophia and Finnegan. She was preceded in death by her parents; husband; an infant son; and 8 siblings, Clarence Anderson, Mabel Magnuson, Myrtle Freeberg, Elmer Anderson, Effie Erickson, Florence Adeline Anderson, Alfred Anderson and Frances Larson Lund. Visitation will be held on Wednesday, October 3 from 5-8 p.m. at Lundberg Funeral Home in Cannon Falls. Funeral service will be held on Thursday at 11:00 a.m., with visitation from 10-11 a.m., at Spring Garden Lutheran Church with Pastors Nick and Cindy Fisher-Broin officiating. Interment will follow at the church cemetery. Pallbearers will be Todd Erickson, Brian Erickson, Jeffrey Erickson, Eric Nerison, Tom McCartney, Mick Murphy and Aaron Vaudt. Memorials are preferred to Spring Garden Lutheran Church.

To order memorial trees or send flowers to the family in memory of Florence Erickson, please visit our flower store.