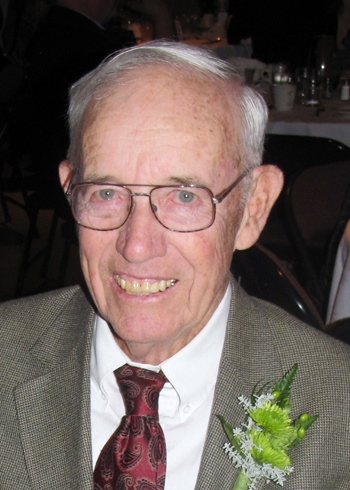 Francis was born at home on February 10, 1922 in Belle Creek Township, the son of Raymond Francis and Mary Leona (O’Reilly) McNamara. He attended country school District 40, and later graduated from Goodhue High School in 1939.

Francis married Marjorie Nelson on June 17, 1950 at St. Columbkill Catholic Church in Belle Creek. Marjorie grew up in Vasa township and taught country school in the Belle Creek area. They lived in Belle Creek Township where they farmed until retiring.  Francis was a lifelong, active member of St. Columbkill Catholic Church, where he could always be called upon to build or fix things around the church. He was on the Belle Creek Town Board for many years and was also involved with the Belle Creek Watershed.  Francis and Marjorie traveled extensively, including trips to China, Sweden, Ireland and other parts of Europe.  They also went on many dairy farm tours across the United States.

Francis enjoyed going for rides and looking at new bridges, buildings, roads or whatever he found interesting.  He was a very talented woodworker and made numerous pieces of furniture and remodeled many homes and buildings.  He loved to tell stories from the past and was so proud of his family and their Irish ancestry.  He enjoyed KDHL Radio and especially Jerry Groskreutz and the Birthday Club. Francis would call in birthdays from the big extended McNamara family each day and Jerry started calling Francis the “Patriarch of the McNamara Clan”.  Francis loved his “My Pillow” and promoted it at every available opportunity. Francis also took a big interest in hot air balloons in his later years but was never quite able to go for a ride like he would have liked. He also loved watching the Mollie B Polka Party, Minnesota Twins baseball and Vikings Football.  He kept himself busy with puzzles in the last several years of his life.

Mass of Christian Burial will be held on Friday, October 16 at 10:30 am, with visitation from 9-10:30 am, at St. Columbkill Catholic Church in Belle Creek Township. Pallbearers will be his grandchildren. Interment will follow at St. Columbkill/Holy Trinity Cemetery.

For everyone’s safety and health, masking and social distancing are required and appreciated.

To order memorial trees or send flowers to the family in memory of Francis McNamara, please visit our flower store.