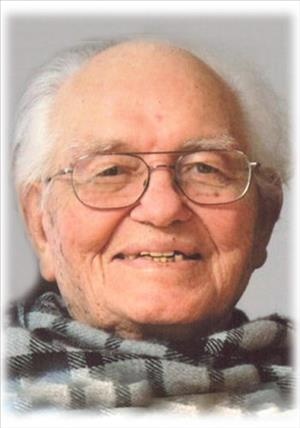 Frank Bernard Wambach, age 92, of Cannon Falls, MN passed away Tuesday afternoon, January 3, 2012 at Presbyterian Home-Johanna Shores in Arden Hills, MN. Visitation will take place at Lundberg Funeral Home in Cannon Falls on Friday, January 6 from 5-8 p.m. A Mass of Christian Burial to memorialize and celebrate his life will be held on Saturday, January 7 at 10:30 a.m. at St. Pius V Catholic Church in Cannon Falls, with Father Jay Kythe celebrating. There will also be visitation at the church from 9:30-10:30 on Saturday. Interment with military honors will follow at the church cemetery. Frank was born in Beaulieu Township, near Mahnomen, MN on June 5, 1919. He was the son of Frank Jacob Wambach and Margaret Meyer. Frank attended high school in Mahnomen where he excelled in both academics and football. He earned a bachelor's degree in biology from the College of St. Thomas. He was a star tackle on the St. Thomas football team known as the Purple Wave from 1938 to 1941. In 1942 he enlisted in the army and worked as a pathologist in the Army's 18th Medical General Laboratory in Hawaii. After completing his military service in 1946, he married Virginia Irene Huhn and accepted a teaching and coaching position in Morgan, MN. In 1949 the family moved to Cannon Falls where he taught for over 30 years, educating multiple generations of Cannon Falls High School graduates. He taught biology, chemistry, physics, and drivers' training, and coached football, basketball and track. A believer of life-long education Frank earned a Master of Education degree from The College of St. Thomas in 1967. Frank was a strong man in mind and body. He was always optimistic and ready to hear or tell a good joke. He loved life and his home in Cannon Falls where he lived for over 60 years. He enjoyed the company of friends, neighbors, and the many former students and acquaintances who stopped by to visit. He was a member of St Pius V Catholic Church and a member of the Knights of Columbus. He also was a Boy Scout pack leader when his sons were growing up. During the 1950s and 60s Red Wing MN sponsored an annual "cubmobile" race that the Wambach boys won four years in a row in cars made by their dad. Many residents of Cannon Falls learned to drive sitting next to Frank, and will remember one of his favorite sayings "smoothly". After Frank retired from teaching, he continued to pursue his long-time interest in coin collecting. He was respected for his extensive knowledge of coins and was often asked to appraise collections. Frank was preceded in death by his parents, his wife Virginia, his brother Robert Wambach, and his sister Dorothy Wambach. He is survived by his children Nancy Wond (Charles Huxel) of Honolulu, Oahu, Hawaii, Frank Robert (Cathrine) of Brooklyn Park, Mn., Gary (Colleen) of Falcon Heights, Mn., William (Karen) of Kansas City, Mo., Mark (Zoe Ann) of Cave Creek, Az., Cynthia Wambach (John Kramer) of White Salmon, Wa., 12 grandchildren, and 9 great-grandchildren. He is also survived by his sister Marcella Nolan of Foley MN and numerous nieces and nephews. Active pallbearers will be grandchildren, Frank J. Wambach, Andrew J. Wambach, John Wambach, Matt Wambach, Nathan Wambach and Monica Horn. Memorials will be given to the Cannon Falls High School Science Department, 820 East Minnesota St, Cannon Falls, MN 55009.

To order memorial trees or send flowers to the family in memory of Frank Wambach, please visit our flower store.