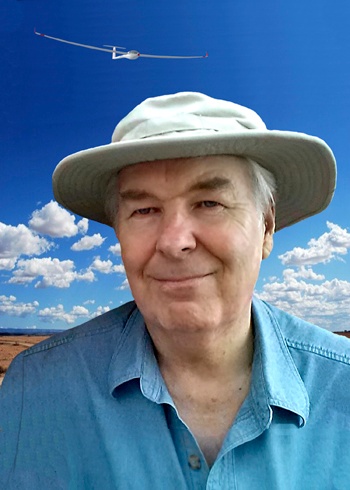 Gary was born on March 11, 1946, the son of Ed and Loretta “Dots” (Proell) Hagemeister, and grew up in Rosemount, MN.  From a young age Gary had a tremendous curiosity.  As a child he often took the bus to the University library to spend his Saturday reading.  Gary became very interested in aviation and began taking lessons at Southport Airport (where Apple Valley Target is now located), obtaining his private pilot license before his driver’s license.

After graduating from Rosemount High School in 1964, Gary attended the University of Minnesota until the age of 21, when he could hire on with Northwest Airlines.  He flew for Northwest for 34 years, retiring in May 2001.  During this time, he joined the Minnesota Soaring Club at the Stanton Airfield and became a soaring enthusiast, competing nationally with his Nimbus, often placing in the top ten.  Gary met his wife, Beth E. Billings of Red Wing, MN, in the Soaring Club.  They were married in Red Wing on May 15, 1982.

Besides being an avid reader, Gary enjoyed photography, woodworking, and traveling with his wife Beth, first using his employee benefits traveling to Europe, and in later years traveling throughout the US and Canada in an RV so they could take along all their furry children.

Gary was preceded in death by his parents, Ed and Dots. He will be forever missed by Beth, his wife of 40 years.  Gary is also survived by his loving sister, Diane, and brother-in-law, Jerry Dittman; Diane and Jerry’s sons, David, Steve (Deb), and Marc (Sharon); his brothers-in-law, John (Toni) and Daniel (Susan) Billings; his sister-in-law, Janet (Bill) Sinkevich; many Billings nieces and nephews; and many more great nieces and nephews.

Gary is soaring new heights now, and we will honor him with a send-off Friday, April 22 at 11:00 am, with visitation from 9:00 am - 11:00 am, at Christ United Methodist Church, 29470 Gaylord Ave, Cannon Falls. The service will be live-streamed and the link can be found below. A luncheon and interment at Lakeside Cemetery, Randolph, will follow the service.

Memorial gifts will be given to the Parkinson’s Foundation.

To order memorial trees or send flowers to the family in memory of Gary Hagemeister, please visit our flower store.