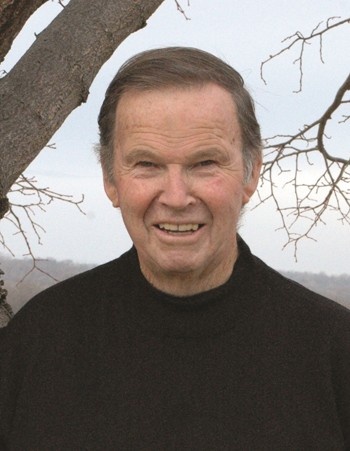 George Robert Conzemius, age 81, of Cannon Falls died peacefully on October 26, 2017 in Cannon Falls, MN. George grew up on a farm in rural Cannon Falls, MN. He graduated from Hastings High School in 1954, where he was active in football, baseball, basketball and 4-H. George graduated from the University of Minnesota in 1959 with a Bachelor of Science degree, and also played football for the Gophers. He furthered his studies abroad in Norway and Russia. After college George taught agriculture, science, and math at Cannon Falls High School from 1960-1969, where he also coached football. George married Karen Jeanne Thorson on August 4, 1962 at the St. Paul Cathedral; they were married for 55 years. George enjoyed being a lifelong farmer, and he worked until the final years of his life.

He served in the US Army and Air Force reserves from 1959-1967.  He served on the Cannon Falls City Council in 1965-66. George ran for the MN State Senate in 1966, and at age 30, was the youngest senator at the time. He served from 1967-1976 and served as Majority Whip his last four years, always advocating for the citizens of MN.  He was the main author of hundreds of bills in the legislature dealing with pollution, education, tax reform, Native American issues, legislative reform, the environment and wildlife. He led the fight to clean up pollution at Pine Bend, helped secure funding for the Minnesota Zoo, and spearheaded health care reform.

He received many recognitions and served on many committees including being elected Chairman of the Minnesota Indian Affairs Commission, Chairman of the Health, Education and Welfare Committee; he was named 1966 Goodhue County Citizen of the Year, and “One of Minnesota’s Ten Outstanding Young Men” by the Jaycees in 1972.

George was a member of Mount Olivet Lutheran Church in Minneapolis. He enjoyed working in his garden and sharing his produce with family and neighbors, attending concerts and plays with friends, watching sports, practical jokes, sharing stories, traveling around the world and attending his grandchildren’s events.  George Conzemius was a teacher, coach, writer, mentor, Senator, farmer, husband, father, and grandfather.

Memorial services will be held at 1:00 pm Saturday, November 4, 2017 at St. Ansgar’s Lutheran Church, 7459 Hwy 19 Blvd., Cannon Falls, MN  55009. Visitation will be from 4 – 7:00 pm, Friday, November 3, 2017 at Lundberg Funeral Home, 5839 Hwy 19 Blvd, Cannon Falls. There will also be visitation one hour prior to the service at the church on Saturday, Interment will be in the Cannon Falls Cemetery. Memorials are preferred to the donor's choice.

To order memorial trees or send flowers to the family in memory of George Conzemius, please visit our flower store.