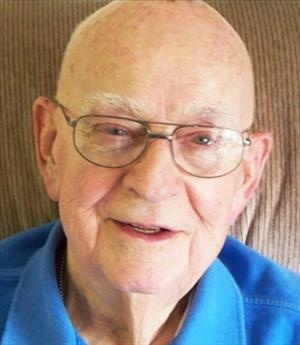 Gerald David "Lefty" O'Reilly, age 89 of Red Wing and formerly of Goodhue, died on Wednesday, May 6, 2015 at his home at St. Brigid's at Hi-Park Assisted Living in Red Wing. He was born on March 6, 1926 in Goodhue Township, MN, the son of Vincent George O'Reilly and Agnes Regina (Guenther) O'Reilly. He grew up in Goodhue and graduated from Goodhue High School in 1944. He went on to serve with the US Navy during WWII until his honorable discharge in 1946. He returned to work at Tomfohr Implement in Goodhue from 1946-1950. He was employed at the Goodhue Post Office as clerk from 1950-65, becoming Postmaster in 1965. He retired in 1989. A very active member of the Goodhue community, he served on the school board from 1953-55 and helped work on the original additions to the school. Lefty was an active member of Holy Trinity Catholic Church, where he served on the council and was a backer of the new church addition. He was a founding charter member of Goodhue Lion's Club, and served at many chicken barbeques over the years. He also served as secretary for Vaughn Bien (District 5M3 Governor in 1969.) He was a member of the Bellechester American Legion Post 598 and volunteered to put out flags at the cemeteries for over 40 years. He was a member of NARP (National Association of Retired Postmasters.) Lefty enjoyed spending time with his family, and was always involved in his nieces' and nephews' activities. He was preceded in death by parents; brothers, Donald (Jen) and James; and nephew, Thomas Bien. He is survived by his sister, Therese (Vaughn) Bien of Goodhue; brother, Larry of Anaheim, CA; nieces and nephews, Kathy (Gary) Reynolds, Cherie (Richard) Coffman, Kerry (Pat) Bien, Vaughn Jr. (Bernadette) Bien, Tim (Denise) Bien and John (Andrea) Bien; and many grand nieces and nephews. A visitation will be held at Holy Trinity Catholic Church in Goodhue on Friday, May 8 from 4-8 p.m., with parish vigil at 8:00 p.m. Mass of Christian Burial will be on Saturday, May 9 at 11:00 a.m., with visitation from 10-11 a.m., at Holy Trinity. Active pallbearers will be Kerry Bien, Vaughn Bien Jr., Tim Bien and John Bien, Charlie and Dick Gorman. Honorary pallbearers will be Kathy Reynolds, Cherie Coffman, and Carl Long. Memorials are preferred to Goodhue Swimming Pool, Sisters of the Order of Saint Benedict, or donor's choice. Interment with military honors will be held on Saturday, May 16 at 1 p.m. at St. Columbkill Catholic Cemetery, Belle Creek Township.

with parish vigil at 8 p.m.

To order memorial trees or send flowers to the family in memory of Gerald O'Reilly, please visit our flower store.