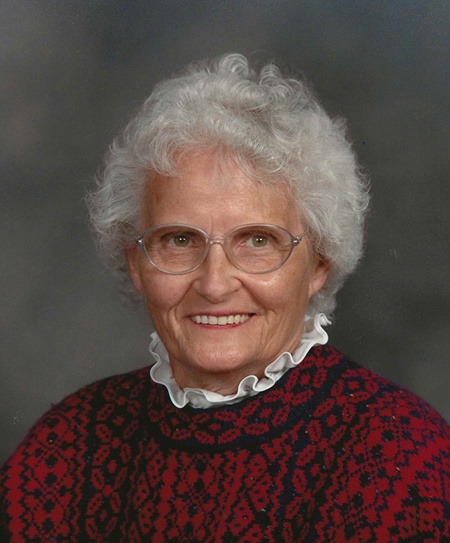 Geraldine (Gerry) Markley Drewry, 89, formerly of Hampton, MN, died peacefully in Northfield, MN on December 11, 2019. She was born on May 18, 1930, the second of three children of Max C. and Gladys (FitzGerald) Markley.

After graduating from college Gerry became the first woman in the newsroom—a copy editor—at the Minneapolis Star. She joyfully married Stanley Eugene Drewry of St. Charles, MN on March 29, 1952 and sadly said goodbye to her job at the Minneapolis Star. They lived first on a farm in Randolph, MN and then on the farm in Hampton, MN, where she and Stanley raised seven children. When her youngest child entered school, Gerry began teaching piano at home and working part time as associate editor of the Dakota County Tribune in Farmington, MN. After Stanley’s death on January 30, 1977, she went to work full time at Honeywell’s Residential Division Public Relations Department and eventually became the public relations manager of the Building Controls Division. While at Honeywell, Gerry took night classes and earned an MBA degree from Mankato State University in 1986. After leaving Honeywell in 1990, she continued working from home as Drewry Communications, doing freelance public relations work as well as regularly attending several local town council meetings and reporting for the Dakota County Tribune. From 2000 to 2001 at the request of Governor Jesse Ventura, she worked as the part time communications director for Minnesota Planning Department. She was an officer and board member of Minnesota AccessAbility and served on the Minnesota Council on Disability.

Gerry was an active volunteer in seven successful political campaigns, including Jesse Ventura’s campaign for governor as well as the Dakota County Farmland and Natural Areas program. She actively participated in the Christ United Methodist Church as a member and pianist; the Minnesota Native Plant Society, producing their quarterly newsletter; Northfield Prairie Partners Chapter of Wild Ones organization; and was a 4-H leader in Dakota County.

Vegetable gardening and flower gardening were two of her favorite pastimes; she studied native plants and planted scores of native plants throughout her farm. As her love of nature grew, Gerry worked with the Minnesota Conservation Reserve program, planting acres of trees, native grasses, and wildflowers to make her farm a nature area and to get her wetland designated as a state natural area.

She loved photography and travel, and after retirement she spent more time on these hobbies. She took many nature and family photographs, competing regularly in photography contests. Gerry had wanderlust, as many members of her family.  She visited England, Scotland, Ireland, Peru, Costa Rica, Kenya, Germany and Australia, and as well as much of the United States.

Gerry taught all of her children to bake, cook, and garden, and all of her daughters to sew. Today, much like Gerry, most of her children and grandchildren love animals, plants, music, art, photography, reading, learning, traveling, gardening, sewing, cooking, baking, and preserving food.

A visitation will be held from 10-11:00 am at Christ United Methodist Church, 29470 Gaylord Ave, Cannon Falls. MN  55009, on Saturday, Jan. 11. The memorial service will follow at 11am. The family will hold a private interment. Lundberg Funeral Home of Cannon Falls is assisting the family.

If friends so desire, donations can be made in Gerry’s memory to Christ United Methodist Church, Northfield Hospice, the Minnesota Native Plant Society, or the Northfield Prairie Partners Chapter of Wild Ones.

To order memorial trees or send flowers to the family in memory of Geraldine Drewry, please visit our flower store.