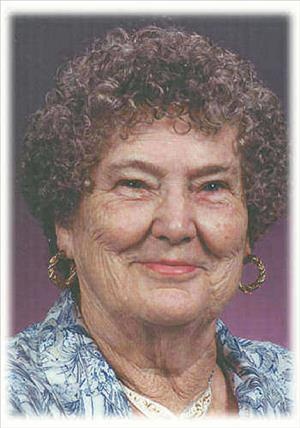 Gwendolyn Jane (Holmes) Carlson-Olson, age 90 of Cannon Falls, died on Wednesday morning, January 9, 2013 at Angels Care Center in Cannon Falls. Gwen was born on December 5, 1922 in St. Paul, the daughter of Bennett and Ruth (Peterson) Holmes. She graduated from Cannon Falls High School in 1941 and was a lifelong member of Spring Garden Lutheran Church. She married Paul Carlson on June 28, 1941 in Welch. They farmed in Belle Creek Township, and Gwen continued to live there for 72 years. At one time, they also owned the Do Drop Inn in Cannon Falls in the early 1960's. She also was a waitress at the Edgewood Restaurant for 16 years. Paul died on August 18, 1989. Gwen married Robert C. Olson on September 7, 1999 at Spring Garden Lutheran Church. She was a strong-willed Swede, and loved to play cards and dance. She was preceded in death by her parents; husband, Paul; and daughter-in-law, Judi Carlson. She is survived by her husband, Bob, son, Marshall, granddaughter, Tami (Ken) Burr, and great-grandchildren, Dennis and Nicole, all of Belle Creek; sister, Marian Konobeck formerly of Stillwater; nephew and nieces, Paul, Stefanie, Carrie and Jenny Konobeck; and by husband, Bob's family. A memorial service will be held on Tuesday, January 15 at 11:00 a.m., with visitation from 10-11 a.m., at Spring Garden Lutheran Church, with Pastors Nick and Cindy Fisher-Broin officiating. Memorials are preferred to Spring Garden Lutheran Church or the Humane Society of Red Wing.

To order memorial trees or send flowers to the family in memory of Gwendolyn Carlson-Olson, please visit our flower store.