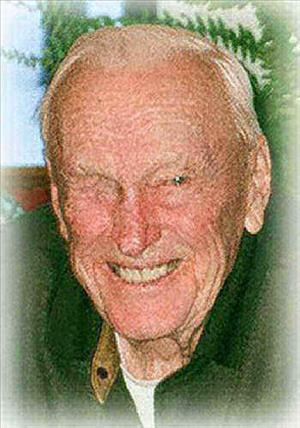 Harold John Anderson, age 92, passed away Monday, April 22, 2013 at Twin Rivers Senior Campus in Cannon Falls. He was known by "Red" Anderson to many because of his red hair. Harold was born on October 6, 1920 to John Rudolph and Sophia (Wang) Anderson in Walcott Township near Faribault, Minn. He was the 6 child of 7 and grew up on a small farm without electricity and running water. He attended a country school until he graduated from 8th grade. He was confirmed at Eklund Lutheran Church. He went to high school in Faribault which required him to board in town and graduated in 1938. After WWII he left the farm and eventually started work at Great Lakes Pipeline, where he laid many miles of pipeline through Lakeville and Rosemount, Minn. He met Alice Pannkuk at a dance in the Surf Ballroom in Clear Lake, Iowa and they were married in April 1951 in Mason City, IA. They were blessed with 5 children and lived in Faribault, Circle Pines and St. Clair before a job change took him to Koch Refinery at Pine Bend near Rosemount in 1963. They bought their first home and moved the family to Hastings, Minn. In 1967 the family moved to Cannon Falls off Hwy 19 with a beautiful view of Lake Byllesby. He loved to garden and took special pride in his tomatoes. Harold enjoyed hunting water fowl, small game, deer and gin sing. His loved to fish and caught many strings of big fish worthy of trophies. He shared his love of fishing with his children and grandchildren. After his wife, Alice, died in 1992 he continued to live in his home until 2009 when he moved to Twin Rivers. He loved to read, play cards, especially Euchre and 500, and he loved to win. Harold was a member of First English Lutheran Church for 50 years. He will be greatly missed by his family and friends. Harold is survived by two brothers; LeRoy S. Anderson of Northfield, Russell O. (Carol) Anderson of Albert Lea; daughters: Karen Anderson of Burnsville, MN, Barbara "Molly" (Bill) Bremer of Cannon Falls, MN; three sons: Gary (Patricia) Anderson of Cannon Falls, MN, Michael (Patty) Anderson of Clear Lake, IA, Mark (Michelle) Anderson of Onamia, MN; eight grandchildren: Brooke (Gary) Wiemann of Mason City, IA, Timothy Anderson of Oakland, CA, Todd (Mandy) Bremer of Hastings, Evan (Laura) Anderson of Clear Lake, IA, David Anderson of Minneapolis, Logan, Aliste and Aidan Anderson of Onamia, MN and eight great-grandchildren: Cody, Haley, Connor, and Cooper Wiemann, Caden and Corbin Anderson, Trey and Emi Bremer and many nieces and nephews. Harold was preceded in death by his parents, wife Alice, brothers; George and Donald Anderson, sisters; Evelyn Bohning and Viola Musegades. A memorial service will be held on Saturday, April 27 at 11:00 a.m. at First English Lutheran Church in Cannon Falls. Interment will follow at the Cannon Falls Cemetery. Visitation will be Friday from 5-8 p.m. at Lundberg Funeral Home in Cannon Falls. There will also be visitation at church on Saturday from 10-11 a.m. Memorials are preferred to First English Lutheran Church.

with visitation at church from 10-11 am

To order memorial trees or send flowers to the family in memory of Harold Anderson, please visit our flower store.