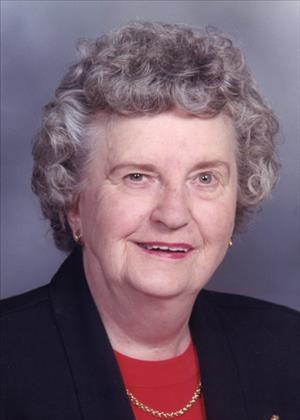 Harriet Marie (Giefer) Thorson, age 96 of Cannon Falls and formerly St. Paul, died on Wednesday morning, April 12, 2017 at Trinity Care Center in Farmington. Harriet was born on August 9, 1920 in Vermillion Township, the daughter of John and Anna (Kranz) Giefer. She attended District #60 country school through the 8th grade, and later 2 years at St. Mathias Catholic School in Hampton. She received her GED when she was 54 years of age! She married Robert B. Thorson on April 29, 1948 at Nativity Church in St. Paul. Harriet worked at Brown & Bigelow from 1941-1950, and later worked at 1st National Bank, St. Paul (now known as US Bank) from 1954-59. She was a former member of Bookbinder Union, and Rosary Societies. She had been active in several senior groups. In her younger years, she enjoyed fishing, hunting, bowling, dancing, sewing, crafts and gardening. She always loved traveling, and in her later years, she enjoyed reading. Her husband died on March 29, 1995. She lived most of her life in St. Paul, and in August, 2001, she moved to Cannon Falls. She was preceded in death by her parents; her husband of nearly 47 years, Robert; and siblings, Merlin Giefer, Marge Millard, and Arleen Noonan. She is survived by her many nephews and nieces. Mass of Christian Burial will be on Thursday, April 20 at 11:00 a.m., with visitation from 10-11 a.m., at St. Pius V Catholic Church in Cannon Falls. Honorary pallbearers will be her nephews and nieces. Memorials are preferred to St. Pius V Catholic Church. Interment will be held at Fort Snelling National Cemetery on Monday, April 24, 2017 at 10:35 a.m. at Assembly Area #6.

To order memorial trees or send flowers to the family in memory of Harriet Thorson, please visit our flower store.