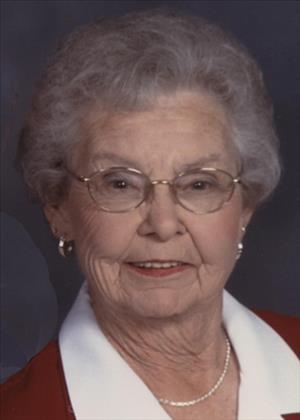 Helen C. Ryan, age 89 of Goodhue, died at her home on Saturday afternoon, September 10, 2016. Helen Catherine McCusker was born in Red Wing on February 26, 1927 to Mary (Ryan) and Charles McCusker. She attended St. Joseph Catholic School and graduated from Red Wing Central High School in 1945. She entered the St. John's Nurses Training program on September 10, 1945 and graduated in 1948 as a Registered Nurse. She married Richard Ryan on January 29, 1949 and moved to Belle Creek Township where they lived on the family farm. Helen was a member of St. Columbkill Catholic Church and the St. Columbkill Rosary Society. She was also active in the Goodhue Community and was a member of the Goodhue Lioness Club, the Belle Creek Homemakers Group, and a long-time volunteer with the Blood Bank and other various community events. She enjoyed spending time with her family, playing cards, traveling, and bowling with her friends. She was very proud of her Irish heritage and her work as a nurse. She is survived by her husband of 67 years, Richard; seven children, Cathy (Alan) Holm, Mary Jo (David) Holst, and John Ryan, all of Goodhue, Rick (Janet) Ryan and Michael (Susan) Ryan, all of Zumbrota, Ronald (Kip Schriefer) Ryan of Maurice, Louisiana, and Juliann Ryan of Minneapolis; 19 grandchildren and 36 great-grandchildren; and sister-in-law June Ryan of Bella Vista, Arkansas. Helen was preceded in death by her parents; brothers, Roy, Earl, and Bob McCusker; her sister, Blanche Stumpf; and several brothers-in-law and sisters-in-law. Visitation will be held at Holy Trinity Catholic Church in Goodhue on Tuesday, September 13 from 5-7 p.m. Mass of Christian Burial will be held on Wednesday, September 14 at 11:00 a.m., with visitation from 10-11 a.m., at St. Columbkill Catholic Church in Belle Creek, with Fr. Randal Kasel officiating. Interment will follow at the church cemetery. Memorials are preferred to the donor's choice. Active pallbearers will be Luke Luhman, Dwight Luhman, Wade Luhman, Matt Ryan, Roger Huling, and Joe Strauss. Honorary pallbearers will be Helen's grandchildren and great-grandchildren.

With visitation from 10- 11am at the church.

To order memorial trees or send flowers to the family in memory of Helen Ryan, please visit our flower store.