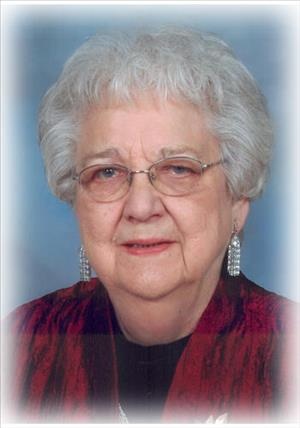 Inez Lorraine Kearns, age 87 of Cannon Falls, formerly of South St. Paul, died peacefully on Sept. 3, 2012 due to respiratory complications at the Cannon Falls Medical Center while surrounded by her family. A memorial service will be 11:00 am Friday, September 7, 2012 at Grace Lutheran Church, 149-8th Ave. S, South St. Paul with visitation one hour prior. A luncheon and fellowship will follow the service. Interment will be in the Danbury Cemetery, Danbury, WI at a later time. Memorials may be directed to the American Cancer Society. Inez Lorraine (Andersen) Kearns, the daughter of Martin C. and Alma (Soens) Andersen, was born March 3, 1925 near Danbury, Wisconsin, the youngest of 8 children. She graduated from Webster High School in 1942 and shortly thereafter moved to The Cities where she worked at Swift and Company for many years. In the early 1960's she started with the 3M Company and was proud to have been appointed the 1st female production supervisor in company history. Inez retired in 1986 after 23 years. Inez was a great cook with a great sense of humor who enjoyed crocheting, knitting and sewing. She loved her children, grandchildren and great-grandchildren very much; they were the prize of her life. Inez also enjoyed her occasional travels which included Hawaii and New York City. She enjoyed hunting and was known by her family as an accomplished marksman. Inez loved watching Twins baseball and professional golf. Inez is survived by her children, Max (Marlene) Kearns of Hudson, WI, Nancy (Ken) Caseltine of Cannon Falls and Jackie Kearns of St. Paul; grandchildren, Taylor (Jen) Kearns of St. Paul, Sasha Kearns of Sandy, OR, Audrey Caseltine of Rochester, MN, Levi Caseltine of Brooklyn Center, MN; great-grandchildren, Zoe and Claire Kearns; brother, Kenneth Andersen of Hinckley, MN and many nieces and nephews. She is preceded in death by her sisters, Erma Hoyman, Margaret Bjorlin, Irene Gerber and Fern Sadler; brothers, Leonard and Harry Andersen. Inez's family would like to give a special thank you to the staff at the Cannon Falls Medical Center for their compassion and care during this time.

To order memorial trees or send flowers to the family in memory of Inez Kearns, please visit our flower store.