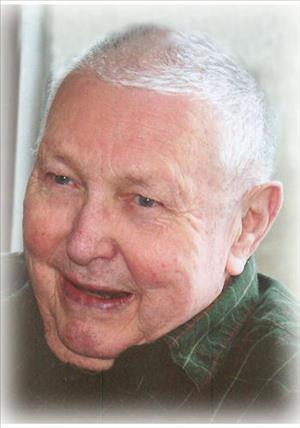 Irvin John "Irv" Freeberg, age 97 of Cannon Falls, died on Thursday afternoon, February 28, 2013 surrounded by his family at Angels Care Center in Cannon Falls. Irv was born on January 8, 1916 in Leon Township, Goodhue County, Minnesota, the son of Walter E. and Myrtle (Anderson) Freeberg. He grew up on the family farm and went on to serve in the US Army in Europe as a cook. He married Anne Lorentz on February 11, 1943 in Tacoma, Washington. After returning from the service he worked for many years in the meat and grocery business owning the supermarket with partner Al Roiger which later became Freeberg's Grocery. He later worked as a mail carrier, handy man at church as well as made deliveries for Cannon Falls Greenhouse. He was a member of St. Pius V Catholic Church in Cannon Falls and was a long time member of the VFW Nelson Scofield Post #4452. Irv was very devoted to his wife and family and enjoyed being active in the community with the Rotary Club, Commercial Club and Knights of Columbus. Irv was a kind and generous person and practiced his faith devoutly. He is survived by daughter, Carol (Jim) Klotter of Farmington; son, Conrad (Mary Rae) of Little Falls; seven grandchildren, Tim, Patrick (Jessica), Joanna (Carson) Dallum, Jeffrey (Teresa) Klotter, Andrew Klotter, Ted Klotter, and Katrina (Dan) Stanchfield; seven great-grandchildren, Nicholas, Carina, Andrea, Derek, and Harli Klotter, Alaina Dallum, Elizabeth Freeberg; sister, Carolyn Kunde; sisters-in-law and brother-in-law, Donna Freeberg, Mary Hoffman, Kay Lorentz, Pearl Lorentz, and Ed (Mary) Lorentz; and many nieces and nephews. He was preceded in death by his parents; his wife of 60 years, Anne; grandson, Gregory Klotter; sister, Ione Swanson; and brother, Ellis Freeberg. Mass of Christian Burial will be held on Monday, March 4 at 10:30 a.m. at St. Pius V Catholic Church in Cannon Falls, with Father Fernando Ortega celebrating. Interment with military honors will follow at the church cemetery. Visitation will be held on Sunday, March 3 from 3:00-6:00 PM at Lundberg Funeral Home in Cannon Falls. There will also be visitation at church on Monday one hour prior to the mass. Active pallbearers will be Irv's grandchildren; Joanna Dallum, Patrick and Timothy Freeberg, Theodore and Andrew Klotter and Katrina Stanchfield. Arrangements by Lundberg Funeral Home in Cannon Falls. On-line condolences may be directed to www.lundbergfuneral.com.

To order memorial trees or send flowers to the family in memory of Irvin Freeberg, please visit our flower store.