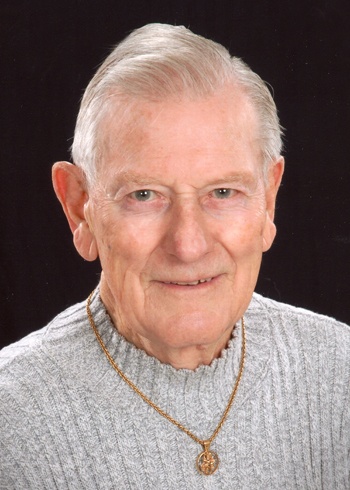 Jim was born on March 31, 1929 in Sacred Heart, MN to James R. Ashton Sr. and Angeline L. (Freese) Ashton. He served with the US Army from 1948-1952. He married Delores “Dee” Thompson on January 1, 1951 at St. Elizabeth’s Catholic Church, Minneapolis.  They moved to Alabama, and he was stationed at Camp Rucker.  They returned to Minneapolis in 1952. They operated their Regal Ware cookware business for 33 years until retiring in 2009. He was an active member of St. Pius V Catholic Church, Cannon Falls and was a member of Father Paul Judge Knights of Columbus Council #4481.  Dale Wisherd and Jim started the Lake Byllesby Association.  He also served as president of MN Association of Direct Selling Companies.

He is survived by his wife of nearly 68 years, Delores “Dee” Ashton; sister, Margie Dalton of Tucson, AZ; and many nieces and nephews and their families.

He was preceded in death by brothers, LuVerne, Frederick, and Myron Ashton; and sisters, Blanche Ashton, Katherine Rhode, Irene Schultz, and Angeline Baker.

Mass of Christian Burial will be held on Monday, Dec. 3 at 11:00 a.m., with visitation from 10-11 a.m., at St. Pius V Catholic Church, Cannon Falls. Interment with military honors will be on Thursday, December 6 at 11:45 a.m. at Fort Snelling National Cemetery, Assembly Area #5. In lieu of flowers, memorials are preferred to donor’s choice.

Active urn bearer will be Sam Weber. Honorary urn bearers will be the Knights of Columbus.

To order memorial trees or send flowers to the family in memory of James Ashton Jr., please visit our flower store.