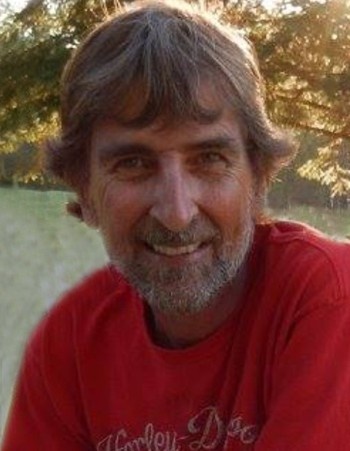 James Marshall Welt was born August 1, 1961 in Winona, MN to Larrimore and Marilou Welt. His family moved to Cottage Grove then to Cannon Falls where they settled for his lifetime. He graduated from Cannon Falls High School in 1979 and attended Dakota County Technical College for heavy equipment repair where he met his wife, Cheryl Maki. He graduated in June of 1981 and was married that same month.

He loved being a father to three redheaded girls; Jessica, Kati and Emily and one redheaded granddaughter, Chloe. Jim was a kind father who often spent evenings reading to his young daughters at bedtime and could be found at home over his lunch breaks to enjoy their company and All My Children.  He found joy teaching them to ride bikes, drive snowmobiles, cars and riding their own motorcycles. Some other favorite adventures included walking in the woods behind his house in the fall followed by sledding and snowmobiling in the winter in the valley he lived and grew his family in. Family road trips were often, with many weekend adventures piled in the Astro van spanning from Duluth to South Padre Island, TX playing the Who Sings It game and hitting every wayside, park, or scenic overlook along the way. He was the type of father that would drive his 3 daughters to school all packed into in his little red S-10 every day and who showed up to all of their sports and school events, smiling and full of grease from his job. A greasy Jim was a happy, earning Jim. He said “greasy clothes are full of income.”

Jim began working in his youth delivering the local newspaper on his bike. He worked several summers as a teen for Zachman Homes and winters at Welch Ski Village between his hours at the family business, Dakhue Landfill. He grew up on heavy equipment and learned to love the skill of mechanics through his grandfather, Cecil, operating and tinkering on the business machinery. From the landfill he moved on to learn the craft of semi-truck mechanics and opened his own business in 1992 by renting a single bay in his grandfather’s shop. He built his business from 1 loyal customer to more than 500 over the years and thrived with little to no paid-for advertising but by reputation and word of mouth and was a MN D.O.T state inspector for 28 years. Many of his customers have said he was an honest mechanic who was generous with his knowledge as he shared his tools and expertise with those who asked. He would pick up the phone and talk anyone through a “do it yourself” fix even if it meant the loss of a paid job for him. His customers called him a fair and reasonable priced man and once they became his customer, they stayed his customer for life.

His shop and going to work every day to see his customers were often a topic of his conversations with new and old friends. Jim was a jovial person who enjoyed all aspects of his life. Aside from working and spending time with his family, motorcycling and weekend road trips across the country were some of his other favorite activities. He had a love of motorcycling since childhood and had logged over 300,000 known miles with his wife Cheryl. He was a motorhead who loved everything from riding to working on and building his own motorcycle from scratch with parts from swap meets and rallies. His Softtail, which is one of his own creation, is also known as his “game bike” as he was an avid motorcycle rodeo game participant winning many proud trophies over time. None of which shine as bright as he did.

After his year and half battle with Stage 4 Lung Cancer, he passed away in his home surrounded by his family on November 23rd. He is survived by his wife of 36 years, Cheryl, his daughters Jessica (Shane) Kelly, Kati (Dave Sieben), Emily and his granddaughter Chloe. His parents, Marilou and Larrimore, siblings Anne (Cal) Zachman, John (Carol) Welt, Amy Welt, Andrea Talmontas, brother-in-laws Nathan Linde and Kirk Talmontas, as well as many nieces and nephews.

To order memorial trees or send flowers to the family in memory of James Welt, please visit our flower store.