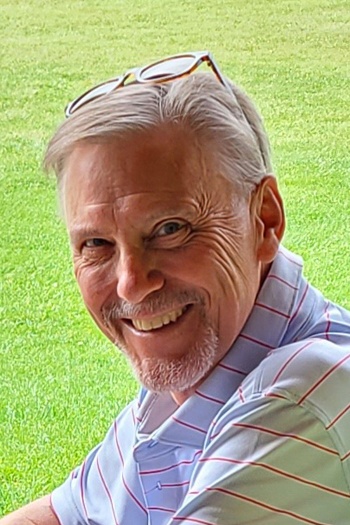 Jay Thomas McCleary, 64, passed away at home on November 13 after an 11-month battle with esophageal cancer.  He was born in Oak Park, Illinois, on September 4, 1957, to Ruth and Neal McCleary, who lived in a bunk car on the Burlington Northern railroad tracks.  Jay always liked to tell people he wasn’t from the wrong side of the tracks; he was from on the tracks .  Jay’s childhood was spent in Cottage Grove, MN, and then in Red Wing from his sophomore year until graduation in 1975.  He married Nancy Gustafson on June 20, 1981.  Jay worked for Midland Cooperative, briefly for S.B. Foot Tannery, and 34+ years for the City of Red Wing as Purchasing Agent and Deputy Director of Public Works, retiring in March 2015.  He continued as a member of the Sustainability Committee, one of his passions, and traveled to other communities and even a national conference in Philadelphia to speak about Red Wing’s sustainability commitments, in particular, their solar arrays.  He was so proud when he was recently honored by the Sustainability Commission when they named their new annual award after him and made him the first annual recipient.  Other passions of Jay were travel, helping people with their projects, playing cards, music, Red Wing hockey, sports of all kinds, cars (especially his Mustang), and family.  If you were looking for him, it was a good bet he was either at his cabin in northern Wisconsin or on the golf course with friends.  He loved talking to people, and Cal Kinney once said about him, “If words were electricity, Jay would be a power plant.”

Jay is survived by his wife of 40 years, Nancy; sister and brother-in-law, Dawn and Larry George; brother-in-law and sister-in-law, Steve Gustafson and Monica Deignan; sister-in-law and brother-in-law, Barbara and David Ives; nieces – Regina (Wes) Edmisten, Nichole George-French, Erin George, Meaghan (Jake Robertson) Gustafson, Katie (Greg) Holub, and Kelsey (Heiner) Vargas; nephews – Taylor (Giana Gleeson) Ives, and Anthony (Kelly) George; numerous great nephews and nieces; more cousins, aunts and uncles than I can count (His mother was one of 17 children – whew!), and some of the best friends a guy could have.

Preceding Jay in death were his parents, Ruth and Neal McCleary, and grandparents, Ella and Edwin Niebeling and James T. and Helen McCleary.

To order memorial trees or send flowers to the family in memory of Jay McCleary, please visit our flower store.

No services to be held