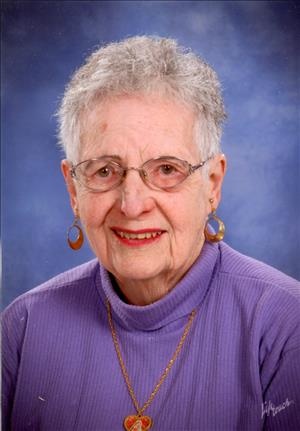 Jean Marvel (Ferguson) Jensen, age 88 of Cannon Falls, MN passed away on December 26, 2015. A service will be held Wednesday, December 30, at 11:00 am at Lundberg Funeral Home, 5839 Hwy. 19 Blvd, Cannon Falls, with visitation one hour prior. Interment at Fort Snelling National Cemetery will be held at a later date. Jean was born to Molly & George Ferguson on April 29, 1927 in Carson, ND. She spent her young years growing up on the ranch and attended country school, graduated from the 8th grade in Carson, ND. She spent two years at St. Mary's High School in Bismark, ND. Jean got her first job in 1943 at the post office in McIntosh, SD and five years later, moved to Miles City, MT with her parents due to the ranch flooding out. She worked a short time as a telephone operator which lead into getting a position at the local hospital running the switchboard and registering patients. Jean married Milton B. Jensen on June 8, 1950 in Miles City, MT and seven children were born to this union. In the early years of their marriage, they moved to Southern California. For 14 years, Milton was a mechanic and Jean was a homemaker. In 1967, the family moved to Minnesota, living in Newport where they both were active members in the VFW & American Legion posts for many years. In 1974, they purchased a small hobby farm in Coates, MN where Jean started working as a waitress at the House of Coates, where she stayed for 17 years. Jean's outgoing personality made her a favorite with patrons and she enjoyed telling stories from that time in her life. After their retirement, they moved to Cannon Falls. Jean transferred her St. Paul Park membership and was an auxiliary life member of the VFW in Cannon Falls, and was also an American Legion member for 45 years. Jean also did volunteer work for the Red Cross and Hastings Veteran Home. Jean was preceded in death by her parents; husband, Milton; son, Garry; sisters, Janet (Jim) Weekes and Ellen Miller. She is survived by her six children, Rickey Jensen, Larry (Donna) Jensen, Jorgia Jensen (Ken Alwin), Eldon Jensen, Eldora (Mark) Landree, and Clarence (Ruth) Jensen; brother-in-law, John Miller; sister-in-law, Elaine Jensen; 7 grandchildren; and 8 great grandchildren.

To order memorial trees or send flowers to the family in memory of Jean Jensen, please visit our flower store.