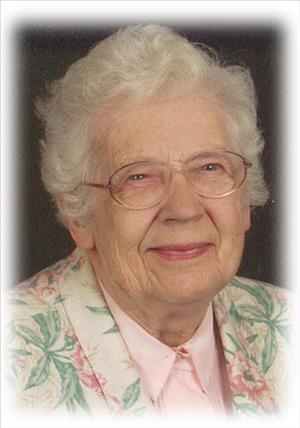 Jean Gertrude Tilderquist, age 93 of Vasa, passed away peacefully on Tuesday afternoon, December 13, 2011 at the Angels Care Center in Cannon Falls, following a short illness. Jean was born on October 15, 1918 on the Schafer farm in Oak Center, MN to Edna (Schafer) and Henry Abraham. She graduated from the School of Agriculture high school at the University of Minnesota where she met her husband, Conley. Jean worked as a cook for the E. H. Foote family in Red Wing and then for Dr. A. E. Johnson. She and Conley were married on June 10, 1942 in Lake City. They farmed in Vasa township and were married 57 years when Conley died in October, 1999. Jean was active as a 4-H leader for the Vasa Happy Hustlers, was a member of three Extension Project Groups, and served as the secretary for the Goodhue County Extension Home Council. She and Conley were involved with the Gideon's and she was currently secretary of the auxiliary. They were also founding members of Our Saviour's Ev. Lutheran Church in Cannon Falls. Jean was an officer of the Lutheran Church Women at First Lutheran Church in Red Wing, and taught Sunday school for many years. She was a gracious hostess and the coffee pot was always on! She loved to bake and entertain, enjoyed gardening and farm chores, and studied the Bible faithfully. Jean is survived by her three sons, Maurice of Wanamingo, Bruce (Kathy) of Cannon Falls, and Paul of Vasa; grandchildren, Marie (Kyle) Menke, Eric (Mandie) Tilderquist, and Jill (Andy) Burnett; great-grandchildren, Eli, Ava and Emma Menke, and Max, Maggie and Hank Tilderquist; sister, Marian Cordes of Red Wing, brother, Lloyd (Joan) Abraham of Lake City; sisters-in-law, Marian Tilderquist of Minneapolis and Iva (Robert) Kvam of San Leandro, CA; and numerous nieces, nephews, and extended family. She was preceded in death by her parents; husband, Conley; daughter, Barbara in 1980; and sister, Muriel Albrecht. Funeral service will be held on Saturday, December 17 at 1:00 p.m., with visitation from 12-1 p.m., at Our Saviour's Ev. Lutheran Church in Cannon Falls, with Pastor Dave Jore officiating. Interment will follow at the Vasa Lutheran Cemetery. Active pallbearers will be Eric Tilderquist, Scott Johnson, Steve Hyllengren, Wally Gardiner, Mike Olson, and Duane Albrecht. Honorary pallbearers will be Marie and Kyle Menke, Mandie Tilderquist, Jill and Andy Burnett, and the great-grandchildren. Memorials are preferred to the Gideon's or donor's choice.

To order memorial trees or send flowers to the family in memory of Jean Tilderquist, please visit our flower store.