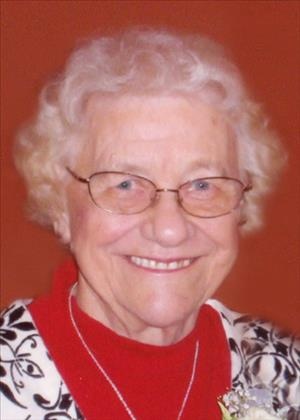 Jeanne Marie Kvittem, age 90 of Cannon Falls, died peacefully at her home at Twin Rivers Senior Campus on Wednesday morning, November 25, 2015. Jeanne was born on November 12, 1925 at home on the farm in Leon Township, the daughter of Robert and Elvira (Edstrom) Lindell. She grew up in that area, and married Ervin J. Kvittem on September 2, 1944. They farmed in the Spring Garden area for 25 years until Ervin had a heart attack and forced them to move in to Cannon Falls. Ervin died on September 22, 1979. She married Royal Featherstone of Red Wing on June 13, 1987. They continued to live in Cannon Falls. Royal died on September 17, 2011. Jeanne was a lifelong, active member of the Spring Garden Lutheran Church, where she was baptized on December 13, 1925 and confirmed on May 16, 1940. She was a home health aide for 21 years for Goodhue/Wabasha Health Service. She did volunteer work at the nursing home and with respite care. She enjoyed crafts, sewing, and traveling. She was preceded in death by her parents; her two husbands; infant daughter; brothers, Paul, Gordon, Leslie and Willard Lindell; and sisters, Doris Wagner, Lorraine Kasa, Arlene Callstrom and June Klossner. She is survived by sons, Randy (Ann) of Eagan, Myles of Dillon, CO and Ross (Jeanine) of Burnsville; grandchildren, Brent (Lisa), Jamie and Evan; great-grandchildren, Greta, Ava, and Ella; sister-in-law, Adeline Lindell; and many nieces and nephews. Visitation will be held on Sunday, November 29 from 2-5 pm at Lundberg Funeral Home in Cannon Falls. Funeral service will be on Monday, November 30 at 11:00 a.m., with visitation from 10-11 a.m., at Spring Garden Lutheran Church. Interment will follow at the church cemetery. Active pallbearers will be Brent, Jamie and Evan Kvittem, Marshall Lindell, Eric Kvittem, and Mark Lindell. Honorary pallbearers will be Godchildren, Merlyn Lindell, Eugene Benson, Ann Carlson, Janet Matthees, Joanne Corbin, Judy Miller and Kelly Wise. Memorials are preferred to Spring Garden Lutheran Church.

To order memorial trees or send flowers to the family in memory of Jeanne Kvittem, please visit our flower store.