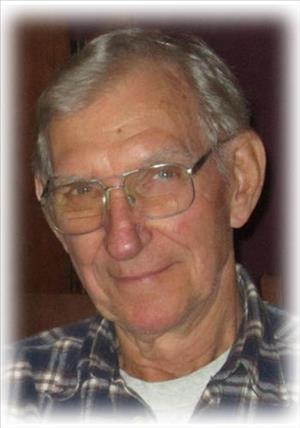 On October 3, 2012, Jerry Lee Warren of Goodhue, MN, age 79 years, 8 months, 28 days passed away peacefully at home surrounded by family. Jerry was born January 5, 1933 in Menomonie, WI where he attended school and later married Regina "Gine" Owens on May 3, 1950. Jerry came to Goodhue in 1959 and worked 16 years at the Goodhue Coop Creamery, then Mid-American Dairy in Zumbrota until 1974. He then opened Jerry's Garage in Goodhue, which he operated until he retired in 1994. After retiring he continued working and enjoyed working outside for Larson Industries installing vinyl fencing until 2011. He was a volunteer fireman for 24 years in Goodhue and served on the city council for 24 years as well. He was an active Lion's Club member and very involved with his community. He enjoyed car auctions in search of "vintage tin" in surrounding states, especially the Dakotas. His love of old cars stayed with him all his life and was passed on to his sons. He enjoyed reading, and following his grandchildren's activities and sports. He will be sorely missed. He is survived by his wife of over 62 years, Regina "Gine"; sons, Steven (Kathleen) of Monticello, Jeffrey (Harriet) of Goodhue and Scott (Kathy) of Belvidere; 7 grandchildren, Erin, Andree, Jordan, Olivia, Timothy (Kristi), Kelsey Deaton and Colin; sisters and brother, Joanne (Thor) Soderholm of Madison, WI, James of Eau Claire, WI, and Judy Meixner of Madison, WI; many nieces, nephews, cousins and friends. He was preceded in death by his parents, Donald and Dorothy (Cotts) Warren. A visitation will be held on Sunday, Oct 7 from 4-8 p.m. at St. Peter's Lutheran Church in Goodhue. A memorial service will be on Monday, Oct 8 at 11:00 a.m., with visitation from 10-11 a.m., at the church, with Pastor Randall Kuznicki officiating. Interment will follow at Evergreen Cemetery in Goodhue. Active urn bearers will be his sons. Honorary pallbearers will be his grandchildren.

To order memorial trees or send flowers to the family in memory of Jerry Warren, please visit our flower store.