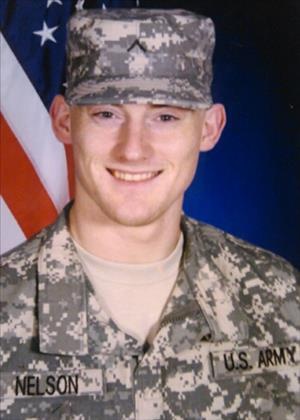 Jesse Lee Nelson, age 23 of Becker, MN and formerly of Cannon Falls, died on Monday, August 3, 2015 as a result of injuries sustained in a motorcycle accident. Jesse was born the youngest of three boys on January 13, 1992 in Hastings, MN, the son of Daniel J. and Donna L. (Utz) Nelson. He grew up in Cannon Falls. A very mischievous, active, and curious child, he constantly kept his parents on their toes with his antics and once started a snowmobile at the age of three when the keys were left in it. Jesse was a 2010 graduate of Northfield High School and enlisted in the Army National Guard after graduation, where he became a very dedicated soldier and respected member of his battalion. His superiors often spoke of his dedication to service and his amazing athleticism. His bubbly and friendly personality made him very personable and loving to others; family and friends often said he'd give the shirt off his back for anyone. Jesse was proud of his physical accomplishments and being a certified personal trainer, enjoyed athletics and sports, and was very musically inclined. He played French horn, piano, guitar and trumpet. Jesse loved the outdoors and camping. He was a "motor head" and enjoyed anything that had a motor! He loved driving anything from his dirt bike to military tanks. Jesse could talk in depth about anything and his superiors often spoke of his very bright future in the military. Jesse's amazing charisma and love for people and service to his country will be greatly missed. Jesse is survived by his mother Donna Nelson and step father James Chojnacki of Randolph; his father Daniel Nelson and step mother Barbara of Grand Rapids, MN; brothers Justin (Annie) Nelson of Kenai, Alaska and Jeremy (Amanda) Nelson of Maple Grove; step brothers, Josh Chojnacki (Amy) of Northfield, Matthew (Kathryn) Moorhead of New Prague, and Isaac Simunovich of Marble; step sisters Jennifer (Joe) Stein of Shafer and Jessica (Warren) Wasson of Deer River; nephew Wyatt Nelson and his mother Delaine Hurda of Cannon Falls; significant other Desiree Keller of Becker, and Desiree's six year old daughter Avery, with whom he had a very special relationship; and many aunts, uncles and cousins. He was preceded in death by his grandparents, Warren and Lavaine Utz, Orville Nelson, and Lavern (Al) Holzemer, and cousin, Joe Utz. Funeral service will be on Saturday, August 8 at 11:00 a.m., with visitation from 9-11 a.m. at Riverwood Community Church, 5343 Hwy 19 Blvd, Cannon Falls. Interment with military honors will follow at the Cannon Falls Cemetery.

To order memorial trees or send flowers to the family in memory of Jesse Nelson, please visit our flower store.