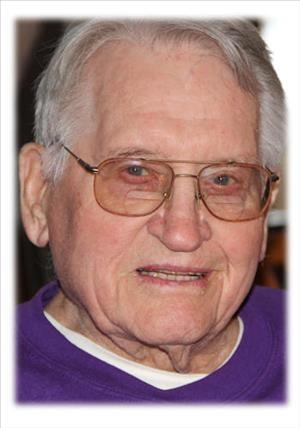 John W. Burch, 96, lifelong area resident, died February 7, 2012, at Angels Care Center in Cannon Falls. John was born in Stanton May 2, 1915 to George and Lillie (Fox) Burch. He graduated from Randolph High School and earned a Bachelor of Arts degree in History from Hamline University in St. Paul. John married Jeannette Lee Scriver on April 26, 1943. They had two children, sponsored the first foreign exchange student in Cannon Falls and were foster parents for a boy and two girls. John was called up for military service in 1942. He received an honorable discharge from the U.S. Army in 1946, joined the Army Reserve and retired with the rank of Major in 1965. He was instrumental in getting an Army Reserve building built in Cannon Falls. His favorite memories included swearing in new local recruits.

After WWII ended, John taught "Veterans' On-Farming-Training" in Cannon Falls until 1955 and was Cannon Falls Postmaster from 1955 to 1981. He was dedicated to serving the public well in this position and often said "All we have to sell is service." After retiring from the Post Office, he and partners built three condominium buildings in Cannon Falls. John was a sports person. He learned to play baseball from his older brother, Lawton, when he was a small boy. He played baseball at Hamline, in the Army and town team baseball for Randolph, Stanton, Goodhue, and Cannon Falls. After he retired from playing baseball in 1961, he played softball, umpired games and ran the local concession stand. He was honored by the people of Cannon Falls when the ball park was named after him. He also bowled, golfed and played cards. John was also very civic-minded and believed in buying locally and serving the community. He was active, often in a leadership role, in many organizations including, the American Legion, Rotary, City Planning Commission, Commercial Club, Industrial Development Organization, and was on the hospital Board. He was given the "Hometown Spirit Award" in 1994. John was active in the Congregational Church and served as Treasurer for 17 years, Deacon, clerk, delegate, and moderator. John is survived by his children, John Hiram (Barbara) Burch of Minnetonka and Anne (Steve) Burt of Eustis, Florida, four grandchildren, Kelli (Reed) Nelson, Wendy (Scott) Sirovy of Minnetonka, Dawn (Brian) Dahlberg of Plymouth, and Michael Burt of Eustis, Florida, and four great grandchildren, Kaylee, Kyle, Kristia, and Kurt Sirovy of Minnetonka. He was preceded in death by his parents, his wife of 66 years, Jeannette, his brother, Lawton, sisters-in-law Luella Burch and Vilaty Patnode and brother -in-law, Robert Patnode. A memorial service will be held on Tuesday, February 14 at 10:00 a.m. at the First Congregational United Church of Christ in Cannon Falls, with Pastor Barbara Martin officiating. Inurnment with military honors will follow at the Cannon Falls Cemetery. Visitation will be held on Monday from 5-7 p.m. at Lundberg Funeral Home in Cannon Falls. In lieu of flowers, memorials may be made to the First Congregational Church of Cannon Falls, Angels Care Center, John Burch Park (limestone wall replacement) or Shepherd's Center of the Cannon Valley.

To order memorial trees or send flowers to the family in memory of John Burch, please visit our flower store.